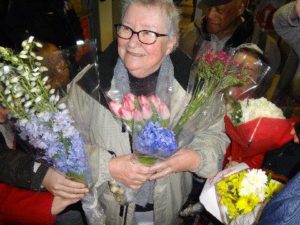 By the time you read this, Lynne Stewart, New York’s people’s lawyer, will be home, sleeping in her own bed, in the company of her beloved husband, Ralph Poynter, and their children and grandchildren.

It has been a long and tortured haul — from judge to judge, from bias to hatred (with no small amount of jealousy, we might add) — to punish Stewart, not because of her words in the press, but because of her advocacy on behalf of the poor, the oppressed, the dispossessed, the targeted and the powerless.

She was the lawyer you got if you were in trouble, broke or both.

She and Ralph toiled in New York for years to make sure people had at least a shot when they entered the icy courtrooms of New York, the anterooms of prisons and perdition.

Lynne is ill, yes; but her spirit is fine. She knows that her family — and the extended family of activists near and far — love her.

As she rests and recuperates with her family, we unite to hope that this season is but the first of many, many, many more.