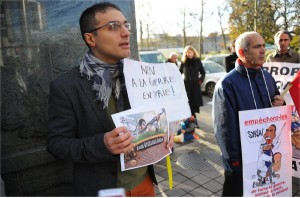 Kimyongür Bahar in Brussels on Nov. 13. His sign reads: ‘No to war in Syria.’
Photo: Dursun Aydemir

After 13 days in prison following an international arrest warrant issued against him, Kimyongür Bahar, a Belgian citizen of Turkish origins, is currently under house arrest in Massa, Italy. Bahar is an anti-war activist and political journalist who the Turkish government, led by Prime Minister Recep Tayyip Erdoğan, has declared to be a “terrorist” even though his actions involved organizing legal protests in Belgium and not in Turkey against the Turkish regime.

His real “crime” has nothing to do with so-called terrorism, but rather for his good work in denouncing the undemocratic aspects of the Erdoğan government, which has repeatedly demanded that he be arrested and extradited to Turkey. Should that demand be carried out it would put not only his freedom but his life at risk.

Bahar has degrees in Art History and Archaeology at the University of Brussels. He is the director of the International Institute for Peace, Justice and Human Rights, and is a spokesperson of the Committee against the Interference in Syria.

We know Bahar at Workers World for his excellent journalistic work clarifying both developments in Turkey and in the rest of the region, especially in Syria. In November, he organized a public demonstration in Brussels against Western intervention in Syria, which is responsible for hundreds of thousands of deaths and of destitution for millions of Syrians.

The Erdoğan regime has been trying to condemn Bahar to 22 years in prison for protesting in Parliament against the practice of torture in Turkish prisons. In past legal cases, both Belgian and Dutch justices decided that the charges of terrorism against Bahar are unfounded.

Nevertheless, Interpol, the West European police agency, had him  arrested last year, first in Spain and again on Nov. 21 in Italy.  According to the constitution of Interpol, it is forbidden to arrest people for ideological reasons, yet that is exactly what it is doing regarding Bahar.

Bahar’s supporters in Europe have issued a petition demanding all charges against him be dropped. As of the evening of Jan. 12, some 3,572 people had signed, including Noam Chomsky. The petition can be found at freebahar.com in six languages, including English.