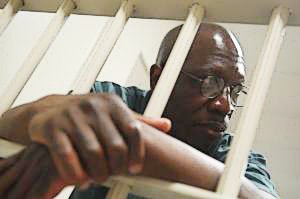 In November 1996, Clarence Moses-El, who is imprisoned at Kit Carson Correctional Facility in Burlington, Colo., expected to be vindicated of the rape for which he had been convicted in Denver. Ever since his conviction in 1987, Moses-El has upheld his innocence. From the beginning, he asked that the biological evidence be tested. It wasn’t.

But in 1996, after having raised the $1,000 requested by Barry Scheck of the Innocence Project, money that he was able to pull together from donations given to him by fellow prisoners, Moses-El felt that he was finally going to prove his innocence.

He won a court order to get evidence tested, including a sexual assault kit, bed sheets and clothes of the victim. Four weeks passed. Instead of being tested, the evidence — in a box marked, “DO NOT DESTROY” — was tossed into a dumpster by the Denver Police Department. And with it, it appeared that Moses-El’s chance to prove his innocence was discarded.

Moses-El would later appeal his conviction, but the request for a new trial was turned down by a judge based on the 1988 Arizona v. Youngblood decision, which determined that destroying evidence or negligence, in and of itself, does not constitute “bad faith.”  The court’s opinion stated, “Unless a criminal defendant can show bad faith on the part of the police, failure to preserve potentially useful evidence does not constitute a denial of due process of law.” (coloradoindependent.com, Dec. 2, 2013)

The destruction of the evidence was against procedures of the DPD, according to a series of articles on destruction of evidence published by the Denver Post in July 2007. The newspaper found at least 141 cases of persons in prison who had evidence thrown out that would have exonerated them of the crimes of which they had been convicted.

In 2007, attorneys associated with the Innocence Project requested that the case be reopened, especially after the Denver Post articles, but the district attorney, Mitch Morrissey, refused to investigate the case, stating, “The defendant has had his day in court.”

Investigator: ‘I have always had doubts’

Morrissey still upholds that Moses-El does not deserve a new day in court, despite a confession by the person originally identified as being the attacker.

LC Jackson, who was one of three people with the victim when they were drinking that night and identified as one of the persons possibly responsible for the attack, recently gave a confession after having written a letter to Moses-El, which began with: “I really don’t know what to say to you.  But let’s start by bringing what was done in the dark into the light. I have a lot on my heart.”  (Colorado Independent, Dec. 2, 2013)

Jackson is currently in prison for the 1992 rape and assault of a 9-year-old and her mother.

The victim did not bring up Moses-El’s name until almost two days after the assault, when she said a vision came to her in a dream. She claimed she had visions or premonitions before that had turned out to be true. Her first statement referring to who could be responsible for the brutal rape and assault, which led to her losing vision in one eye, was “LC, Earl, Darnell,” the three men she had been drinking with together earlier in the evening and before she went home alone.

Moses-El was arrested, while Jackson and the others were never arrested or questioned regarding the assault, although they were listed in the victim’s statement and police records.

As to why the victim would accuse Moses-El, the original investigator cites an ongoing argument between the victim and Moses-El’s spouse, the last of which ended with the victim telling his spouse that she would get even with her.

James Huff, a detective who investigated the case and is since deceased, stated in 2005 in a sworn statement: “Due to the fighting and the bickering, the jealousy, the pettiness, all of that, I always have had doubts about this. I could never prove it either way,” and “This is one of those cases where I really wish there was DNA.” (Denver Post, July 22, 2007)

There is now a resurgence to win a new investigation in the case and exonerate Clarence Moses-El. It is important that he be set free as well as paid reparations for the 27 years that he has been locked in prison for a crime he did not commit. This could have been proven years ago except for destroyed evidence and failure to test the evidence in the original trial.