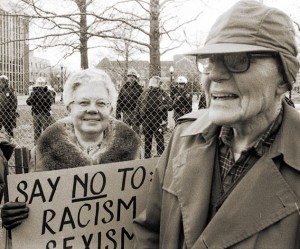 Frances Dostal and Ted Dostal in 2000.

Frances S. Dostal, a founding member of Workers World Party and who, with her spouse Ted, founded the Cleveland branch of WWP, died in her sleep on Dec. 26 at the age of 85. She leaves behind scores of loving comrades, friends, coworkers and activists in the Cleveland movement.

Frances Sherman was born in 1928 in Brooklyn, N.Y., the daughter of Polish Jewish immigrants. Harry Sherman and Tessie Sherman later lost most of their immediate family in Hitler’s concentration camps. Frances and her sister Adele grew up in Brighton Beach, then a Jewish neighborhood.

Her parents were both active members of the Communist Party USA. Thus, while Frances attended public school during the day, she attended the CP-run Jewish school following regular school. In the summer, she went to WoChiCa—Workers Children’s Camp. Decades later, she remembered lyrics from a song she sang there: “We’re fighting for the working class against the bourgeoisie.”

Frances was struck by the discrepancy between what she was told in public school and the way things were presented in Jewish School. Her mother explained that in public school the capitalist version of reality was foisted upon young minds and you had to “vomit it back up at them.” Frances graduated from high school as class valedictorian.

Following high school, Frances attended Brooklyn College, during which time she organized a campus protest against the U.S. war on Korea. This was one of the few anti-war protests during the height of the period of anti-communist offensive known as McCarthyism, named for the reactionary Sen. Joseph McCarthy (R-Wisc.).

Frances went on to attend the Yale School of Nursing, after which she worked as a nurse in and around New York City. She made friends with another young Marxist, Artie Rosen, who introduced her to the Socialist Workers Party. The two of them soon realized, however, that they agreed with the minority faction within the SWP and in 1959 they, along with Sam Marcy, Dorothy Ballan, Vince Copeland, Ted Dostal and others, left the SWP to found Workers World Party.

In the meantime, she and Ted had fallen in love and in 1959 they were married. Now she was living in Youngstown, Ohio, where Ted worked in the U.S. Steel mill.  To announce their marriage they sent out notices to their friends and family around the country, printed with a union bug and proclaiming that “the union makes us strong.” This proved to be an understatement. The two of them together engaged in innumerable struggles, from building an organization of the unemployed to following and harassing the racist Ku Klux Klan all around Ohio to protesting the U.S. war against Vietnam.

One important campaign was in defense of Mae Mallory and Rob Williams, two leaders of the Black liberation movement, who were framed up on bogus kidnapping charges in North Carolina. Williams was organizing self-defense in Monroe’s Black community against KKK attacks; Mallory was a New York supporter of Williams.

Under racist police attack, Williams fled to Cuba and Mallory to Cleveland. From nearby Youngstown, Frances and Ted organized support for Mallory. The Monroe Defense Committee fought to prevent her extradition to North Carolina, delaying it long enough for Mae Mallory to survive and eventually beat the charge.

In 1967, Ted retired from the steel mill and he and Frances moved to Cleveland. They established the Cleveland WWP branch. Within a year, Ted was arrested at a demonstration against segregationist Alabama Gov. George Wallace. A working-class jury acquitted him of “assault on a police officer.”

In 1969, Ted, Mae Mallory and others were arrested and charged with “contempt of court” for demonstrating outside Cuyahoga County Courthouse while Black Nationalist leader Ahmed Evans was on trial. In fact, honoring Mae Mallory’s position that this should be a Black community protest, Ted and Frances were only there as observers. The prosecutor claimed Ted Dostal was leading the demonstration and he spent almost six months in jail. The Cleveland anti-subversive squad testified that they nicknamed Ted “Iron Man” because he never missed a demonstration.

Meanwhile, Frances Dostal had organized the nurses at Kaiser Community Health Foundation, where she worked, into a local unit of the Ohio Nurses Association. She was elected president. Her union responsibilities did not, however, keep her away from the revolutionary movement. Frances, along with younger activists, helped form a chapter of WWP’s youth arm, Youth Against War and Fascism. After the Attica Rebellion, Cleveland YAWF brought eyewitness Tom Soto, who had intervened at the invitation of the rebelling prisoners, to Cleveland and formed a Prisoners Solidarity Committee chapter.

Whenever there was a national mobilization, Ted and Frances worked to bring people to it. Buses from Cleveland took people to national anti-racist marches in Boston in 1974 and Buffalo in 1981. Later in 1981, they brought Clevelanders to the March on the Pentagon to oppose military intervention in El Salvador, as well as to the All Peoples Congress in Detroit, which was called to oppose Reagan’s cutbacks.

In the decades to follow, Frances and Ted maintained their reputation for rarely missing a “demo.” They protested apartheid and the first Gulf War. They demonstrated for Mumia Abu-Jamal and helped free Abdul Haqq, a New York activist falsely charged with murder in 1997. They fought for reproductive rights. From the early days of “Gay Liberation,” the Dostals were among the first straight allies to stand with the LGBTQ movement.

Whenever Workers World Party ran candidates, Ted and Frances were out getting signatures to get them on the ballot. Only after Ted became ill and Frances needed to devote herself to his care was there any letup in the pair’s activism.

Ted passed away in 2003 at the age of 96. Frances remained active until this past year, when her health began to decline. She was a fixture at the peace vigils that have taken place every week in Cleveland since before the U.S. invasion of Afghanistan. Even after moving into a nursing home, she enjoyed having Workers World read to her and hearing about the current struggles.

From her days as a WoChiCa camper up to her last breath, Frances Dostal was a revolutionary communist fighter. Her spirit and smile will be greatly missed.