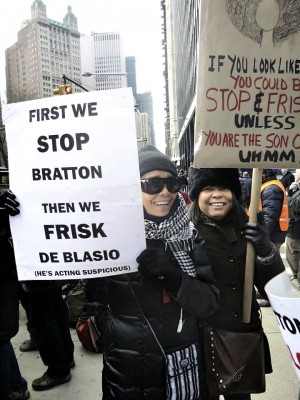 They slammed de Blasio’s choice of stop-and-frisk advocate and arch racist Bill Bratton to head the New York Police Department and de Blasio’s lack of a plan to fight HIV/AIDS, and reminded the city of the many ambitious promises he made to get the votes of poor and working people.

Signs and chants informed the inauguration attendees and onlookers that “Bratton has blood on his hands,” including the deaths of Nicholas Heyward Jr., Anthony Baez, Hilton Vega, Anthony Rosario and dozens of other young people of color killed by police during his first term as New York police commissioner under Mayor Rudolph Giuliani in the 1990s.

While some of the inaugural speakers made populist appeals, de Blasio was sworn in by imperialist war criminal Bill Clinton before a “who’s who” of neoliberal politicians, including Hillary Clinton and Andrew Cuomo.

New Yorkers Against Bratton also announced plans to protest the police commissioner’s official swearing in at Police Plaza on Jan. 2.