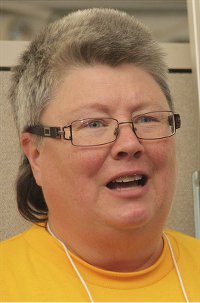 From a 2013 Workers World Party Conference talk by Martha Grevatt.

Some 30 million to 40 million workers in this country are unemployed or underemployed. Millions more are in the ranks of the so-called “working poor.”

This might be expected at the bottom of an economic downturn, but these are the human statistics four years after the U.S. recession supposedly ended in June of 2009 (according to the National Bureau of Economic Research). This is the new normal: permanent overproduction, which doesn’t mean the cycle of boom and bust has leveled out or disappeared, only that the baseline has been moved.

This stage is also marked by a record surge in profit-taking. By lowering labor costs, the bosses increase their own take of the wealth that labor produces. They increase the rate of exploitation. But the more exploited we become, the more out of reach become the very commodities we produce. This can only lead to another bust — on top of the permanent overproduction characteristic of the dead-end stage of capitalist development.

This is the context in which I view the hiring surge in the auto industry in which I have worked for 26 years. More than two dozen plants were closed and tens of thousands of jobs were cut through the 2009 bankruptcy of Chrysler and General Motors and major restructuring at Ford.

Since 1979, more than 270 auto plants have closed, about 40 percent of them between 2004 and 2010. Half of them were in Michigan, especially in Detroit and Flint, which shrunk the number of Black workers holding good-paying United Auto Worker jobs. Ohio and Indiana were also hit hard. Even now, my autoworker counterparts in Brazil, Colombia, Germany, France and elsewhere are still fighting plant closings and mass layoffs.

In 2007, labor costs were estimated to be 8 percent to 10 percent of the cost of a car. It was predicted that contract concessions, particularly the two-tier pay system and the creation of a fund to cover retiree health care, would cut that figure in half. Then, as a condition of the 2009 bankruptcy, there were even more cost-saving concessions.

Now, under improved market conditions, companies have replaced the higher-paid workers who left, but with lower-paid workers. At the same time, they have brought in new, job-cutting technology. This is the profit formula that in 2011 the New York Times called “fewer and cheaper workers.”

By this year’s end, the combined profits of the Detroit Three should easily exceed $10 billion after taxes and interest. They are making more in profits than what they pay in wages and benefits. Interest payments mean the banks also make profits off our labor.

But for workers, the rebound could be short-lived. If another recession hits the U.S. auto market, workers can expect a new round of layoffs. And the production process now requires even fewer workers.

This will be devastating to the second-tier workers. They make $9 an hour less than their higher seniority coworkers. Even that is 2.5 times the minimum wage. But most, especially single mothers, cannot afford the cars they produce. Under the new “Alternative Work Schedule,” they work 10 hours every Saturday and some are working swing shift, once unthinkable in a UAW plant.

Like workers in fast food and retail, most of these exploited workers are young and people of color, many of them women. They could be Trayvon Martin or Renisha McBride. In fact, McBride was a newly hired second-tier Ford worker.

Autoworkers were militant in the 1930s, with the sit-downs, and in the 1960s, with wildcats led by Black workers. A new round of indefinite layoffs could spark real resistance by young, low-wage autoworkers. There is already anger over unequal pay.

What we, Workers World Party, offer young autoworkers is what we offer city retirees facing the loss of their pensions: class conscious revolutionary leadership that is uncompromisingly anti-capitalist. Build Workers World!