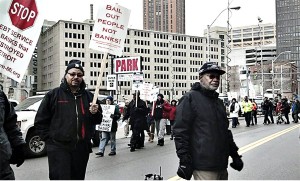 Dec. 3 — Detroit residents, community activists, city retirees and workers from many unions, including teachers, firefighters and others, demonstrated outside the Federal courthouse this morning in downtown Detroit. Inside, federal Bankruptcy Court Judge Steven Rhodes read his decision approving Chapter 9 bankruptcy proceedings for the emergency-management-run city.

Rhodes overrode the Michigan constitution, which says no law can be enacted which impairs or diminishes accrued pensions, when he declared pension funds fair game for paying the banks. During the bankruptcy eligibility trial, a representative of Emergency Manager Kevyn Orr testified that retirees would be treated like every other unsecured creditor — and be offered 16 cents on the dollar.

Activists are predicting that other cities in the U.S. will follow Detroit’s lead and declare bankruptcy in order to rob pensioners of their hard-earned retirement funds.

A major demonstration will be held outside the court on Dec. 17 as Rhodes begins a three-day trial to determine if a $250 million giveaway to Bank of America and United Bank of Switzerland will go forward. For further updates in this ongoing struggle, see workers.org.