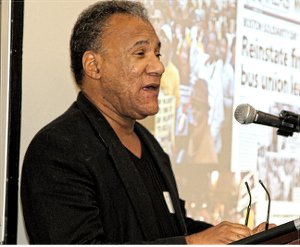 There is a new workers’ movement developing. It’s bold and it has revolutionary potential from the point of view of politics and ideology. What we do, along with others, can make a difference for it.

First, regarding USW 8751, we have to make sure that Veolia fails to bust this great union and is forced to reinstate these courageous union leaders who have been fired and the sooner the better. Local 8751 is rare, in the company of a handful of labor organizations: Local 10 of the ILWU in Oakland/SF that helped to launch the Million Workers March movement, the Black Workers for Justice in North Carolina. Also UE Local 150, which could teach the leaders of the large unions about social unionism, about being in the community, about the solidarity they have with people outside the labor movement that makes them unbreakable in the racist, so-called right-to-work, union-busting South.

We also can’t let the bourgeoisie break Local 8751 because this union is a bridge from traditional unionism to this new, potentially more revolutionary workers’ movement. They have experiences and revolutionary ideas to share that this new movement will find very valuable. It is a bridge.

At the same time there’s also this other struggle that’s bubbling up, and it is an offensive struggle, even if it just demands a 50-cent wage raise or the right to have a union.

Fred Goldstein talked about the economic and social basis for this movement in the development of capitalism, in overproduction exacerbated by technology and organized on a global scale. We, too, have got to learn to organize globally, the sooner the better.

This new workers’ movement has the potential to shoot ahead light years politically and ideologically. Karl Marx said a time comes when besides fighting the boss for a contract and some concessions, labor must organize on a class-wide basis — employed, unemployed, ­underemployed labor, especially the most oppressed, especially the most exploited — and pull everyone into the movement.

Our long-run objective is the complete emancipation of the working class from capitalist exploitation and oppression.

With capitalism so dysfunctional, so violently in crisis, it becomes clear that this system is no longer able to provide people’s social needs. It must be replaced by another system that is genuinely social. The movement to do this is actually coming together before our eyes.

This movement started in a real way in this country with the rebellion of migrant workers in 2006. Migrant workers were key to this development and as ­Teresa Gutierrez said earlier, “Migrant labor is a ­global phenomenon.”

Migrant workers are the cutting edge of this new workers’ movement. And then we saw Occupy Wall Street. And now we’re seeing the low-wage workers in a number of industries — fast food, big-box retailers, and other industries, with tens of millions of low-wage workers. Walmart has more than 2 million alone. McDonalds has another 2 million. Add all the fast-food chains and it’s something like 3 or 4 million. And then there’s the retailers — Cosco and Target.

And the low-wage workers in offices, in restaurants, trapped in hot kitchens, who don’t get off work until 1 a.m., who work two shifts, and janitors, security guards, those who work in hotels, cleaning people’s shit, hospital workers. Tens of millions of workers are waking up.

This movement is migrant, it’s largely women, it’s black and brown, it’s multicultural and multilingual. Some have their own organizations that are not traditional unions. The workers don’t have a contract, they’re not recognized. Whether it’s the day laborers, the domestic workers or the taxi drivers, these are important workers’ organizations in every way, just as important as the traditional unions.

These organizations can’t collect dues, can’t sustain an office, can’t hire staff. What the bigger, more traditional unions have to do is give them the resources. They are in movement. The trade unions have been static. People feel they are not going anywhere; they’re shrinking. Their culture has to change.

I’d like to warn the labor leaders that they must reach out to larger sections of our class, that are not in unions, young people, those who see jails more than they see jobs, those who have no future. Because the capitalists will try to use these dispossessed workers against the unions when workers are fighting to hold onto their pensions, when they’re in a union-busting situation.

And the capitalists will tell the young people who have no jobs and no future, so why be for the unions? Where’s your pension? And more and more they do this. As poverty deepens on a global basis, to the extent they can get away with it, capital will try to pit worker against worker.

Our question is, why doesn’t the AFL-CIO help organize a massive jobs march?

You can find leaders, visionary leaders among the young people. They’re everywhere. They don’t need leadership, they need some buses. We’ll help. Maybe, in some small but significant way, all those young people who march for jobs will get into the labor movement.

What distinguishes this new movement is the potential for ideological transformation and militant tactics.

Low-wage workers in fast food have already attempted several strikes, first on a local basis about a year ago. And at the end of the summer they tried a nationwide strike, I think in 60 cities. Tens of thousands of workers were involved. It’s a small percentage of the total workers. However, they raised hell. People paid attention to them.

If our class called a strike to demand “single payer,” we’d be discussing the new health-care law in a completely different way.

As a revolutionary working-class organization, we have opponents in the working-class movement. We call them social democrats, which more and more today means they see the Democratic Party as the beginning and end of everything. And they have political influence. But this new movement has the potential to transcend the political and ideological limitations of the social democrats.

To do that, it needs revolutionaries who have nothing invested in the pillars of capitalist exploitation and oppression, including the government, from the city councils to the state legislatures to the U.S. Congress.

Regarding the New York election, even more than Obama’s, De Blasio’s election may have raised expectations. I think that the job of the assembly movement and the job of the workers’ assembly is to deliberately create not just a left pole, but a revolutionary pole inside this new workers’ movement to counter those whose orientation is to the Democratic Party.

This is a challenge for us. It’s not going to be easy. It will take work. The beginning of that work is getting into the movement, getting down in the trenches.

Unlike some of the workers, the low-wage workers are concentrated, the stores are everywhere, they are across the street from each other. They’re in the community. They’re downtown, or by a school, thousands of them. Workers all go to these stores.

Logistically it is easy for a mass movement to support these workers’ right to organize and get $15 an hour. For so long the capitalist offensive on a globalized basis has been atomizing the workers. But as Goldstein said, the conditions of production pull the low-wage workers together and make them accessible. Also, wherever their struggle is, it will affect millions of people who are not working at these retail stores that are everywhere.

They’re again calling a general strike for $15 an hour and a union. Black Friday, the day after the racist holiday, it’s a big shopping day and workers are shutting down some Walmarts. That’s the first step. December 5 is supposed to be the big day for a nationwide strike for low-wage workers.

At our last Assembly Movement meeting in New York, we decided to try to organize serious strike support for this action. We hope it reverberates on a national level wherever possible.

We are going to come up with a meaningful way to support this strike. These brave workers can get fired. They are getting fired and sometimes they are struggling back and getting rehired. It’s an intriguing and fluid dynamic and we should help them.

Also, the Saturday before Dec. 5, which is Nov. 30, in our office at 147 West 24th Street here in Manhattan, we will convene a “Solidarity with Low-Wage Workers Assembly” to organize support for Dec. 5. We hope to bring together people from OWS and the “Stop and Frisk” movement to sit down with us and figure out how we can all support this courageous strike of low-wage workers in New York. And I hope you take this back to your cities and try to do it yourself.

If we’re in these struggles, and we are able to erect this revolutionary pole, it will help workers everywhere no matter what their circumstances are. Workers of the world, unite!