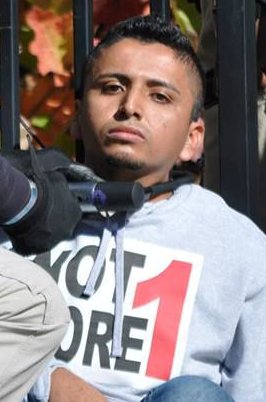 Chained to fence with bicycle lock around his neck, immigrant youth is arrested.

On Nov. 19, in a bold action directed at the detention and deportation practices of the Obama administration, 15 undocumented immigrants and citizen supporters chained themselves to the fence surrounding the Immigration and Customs Enforcement (ICE) headquarters in Atlanta.

Sponsored by the Georgia Latino Alliance for Human Rights, Southerners on New Ground (SONG) and Project South, this direct action was part of a national “Not One More” campaign, which has conducted dramatic protests across the country. In Chicago, activists chained themselves to a deportation bus preventing it from carrying detainees away.

The immigrant rights movement is refusing to accept the lack of congressional progress in passing comprehensive, fair immigration reform while hundreds of thousands of people continue to be detained and deported. The campaign demands presidential action now to stop the separation of families.

To read the statements of those who were arrested in Atlanta and accounts of actions in other cities, please go to ­notonemoredeportation.com