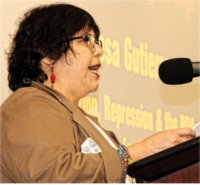 From a WWP Conference talk by Secretariat member Teresa Gutierrez.

I had a dilemma in preparing this talk. What should I focus on? Should it be the migrant struggle? Or another issue I care deeply about, global warming? As we witness heart-wrenching devastation in the Philippines, how can you not think about the climate crisis? What has been the U.S. response? Further militarization of the country! But we say U.S. troops should get out of the Philippines now — after paying reparations for centuries of plunder.

The climate crisis necessitates that our party consider dedicating a specially convened conference on this issue, which cries out for worldwide socialist revolution. We have to get this message out that the only thing that can save humanity from this crisis is to abolish the capitalist system. Only organizations and governments that thoroughly put the needs of the people before the capitalist class have the answers. Cuba of course took it further; they ousted and kept out the capitalist class altogether!

But as a comrade born in stolen Mexico, I need to bring the party’s attention to developments on the immigration question. I place my remarks within the context of the pre-conference document written by Comrade Holmes.

As we have written about extensively, the global working class faces an unprecedented capitalist economic crisis. Capitalism is at a dead end. And a dying animal is a desperate animal, a dangerous animal.

As Marxists, we know that every single capitalist crisis contains the seeds of the system’s own destruction. How do we prepare for this destruction? How do we accelerate it? First, of course, by studying the crisis and its period well.

Conditions for migrants here and around the world provide much material for understanding this crisis as well as the next steps of the struggle: building the People’s Power and Workers’ Assemblies, recruiting and in general preparing the party to be even more battle ready.

Where is the struggle for migrant rights today?

The upsurge of millions of migrants and their supporters in 2006 pushed back heinous U.S. legislation. But the ruling class took note of this massive upsurge and carefully and meticulously responded accordingly. It began to wage an unprecedented assault against this vulnerable sector of the working class.

It mirrored the monstrous assault on the Black community. Mass incarcerations and mass deportations of oppressed people became the rule. An entire generation is experiencing untold dehumanization and degradation. This is a war on the oppressed, especially on youth.

Since 2008, about 2.5 million workers have been deported under the Obama administration. Thousands have been picked up under the E-Verify system. Racial profiling is wide sweeping. It is now a felony to cross the border without documents!

And if current legislation in Washington passes, it will be a felony for a so-called citizen to give an undocumented worker water in the scorching Arizona desert or a ride home from work in Tennessee. This is divide-and-conquer at its worst.

Government policy mandates that 35,000 beds in detention centers must be filled every night by detained migrants, making humongous profits for the Corrections Corporation of America. This policy did not stop during the recent government shutdown. The militarization of the border continues. The money allocated to ICE — Immigration and Customs Enforcement — now numbers in the billions.

None of this has stopped the struggle. Resistance to the war on migrants has been diverse and heroic. It can be as small but profound as young people in Mexico throwing rocks at migra agents across the border.

In fact — a note for FIST comrades — most of the resistance is being led by young people. No surprise. Of the 250 million workers who have been forced to migrate from nations around the world, the vast majority are young people.

The Dreamers, after many appeals to Congress, are now very frustrated and are moving in an independent and radical direction.

Over the last few months, young migrants have deliberately gone up to ICE agents and gotten themselves detained. Why? So they can go into CCA detention centers, organize the incarcerated and condemn conditions inside.

The only way you can describe that is bold, damn bold! Those are the kinds of youth we need to join FIST, work with the PPA and recruit to the party. And the resistance goes on, like that of the exemplary struggle of the Boston school bus drivers.

The migrant rights movement, like many others, is not necessarily class conscious or revolutionary. It is diverse, scattered, single issued, and there are still those who have hopes that the social democrats will lead them out of the void. Class consciousness is not high, but seeds of it are everywhere. This all must be part of our critical assessment.

On other fronts, unions that have made a progressive turn are attempting to fill their ranks with low-wage workers, those traditionally out of the conventional labor movement. We want to work side by side with these sectors, no matter their ties to the capitalist parties. We want to be in the trenches with them and fan the flames of struggle at every turn.

We understand the role of the Democratic Party, which serves to put a brake on the struggle, but we are not ultra-leftists who spew strident rhetoric that can also put a brake on the struggle. Our entire history of more than 50 years is one of nonsectarian, bold but principled intervention. We are some of the best coalition builders in the country, including with social democrats. Let’s be proud of that. We know that they are not the enemy; the capitalist class is.

But if the movement is led by those who count on the capitalist parties, then it will be a movement like the capitalist system — at a dead end. The migrant question illuminates this.

There are many who accept the proposed legislation now in Congress. It is not what migrants have been fighting for. It does not address the root causes of migration. That would challenge imperialism itself.

It accepts guest workers, which means accepting Homeland Security’s program of slamming the back door while opening wide the front door. More workers are being deported than ever before, at the very same time that more workers are coming in through these guest worker programs than ever before, working in conditions that the Southern Poverty Law Center describes as near slavery.

The most important thing the Party can do in terms of the mass struggle is build the movement for the People’s Power Assemblies. Our class urgently and desperately needs the PPA. The migrant question dramatically demonstrates the need for an independent, class-conscious, revolutionary formation to up the ante.

We need to get into the mass struggle even more. We must fight for every right for our class, whether legalization, an end to the prison pipeline or just a traffic light at the corner.

A dying animal is a dangerous animal. Look at what the ruling class did after the migrant movement upsurge. Workers flexed their muscles in 2006 and said, “Bosses cannot run this country without us. You cannot pick the food in the fields, deliver it in the restaurants, take care of the children, and all the rest, without us.” After this upsurge, the ruling class carried out all the anti-immigrant attacks we see today.

The flexing of class power by migrants in 2006 hit the ruling class hard: they lost profits. We must remember that May Day 2006 was a strike, a walkout. That single day cost the ruling class billions of dollars.

Some in the labor movement, many of them well-meaning and dedicated, tried to stop that May Day. Now those same elements are leading the demonstrations for migrant rights, but targeting only the Republicans. That is why we need the PPA.

I think that perhaps the PPAs should soon, maybe not this year or the next but soon, consider taking the example of our migrant sisters and brothers and call for a general strike.

But we cannot and will not call something like that, something so crucial to our class, lightly or cavalierly. Everyone must be united and in genuine collaboration with each other every step of the way for that to mean anything. And we must examine the material basis and conditions to see if they exist. But sooner or later, we must be bold, like the workers at Chicago’s Republic Windows and Doors when they took over their factory in 2008.

Soon we will see workers walk out of factories and offices and then go back and run them without the bosses. But that can only start by building classwide solidarity and consciousness.

We will fight for all this and more. And we will win.

We will win a world with no borders, where workers are free to come and go without fear of being caught like an animal in the desert, without fear of drowning in the icy waters of the Mediterranean, a world where the drive for profits or the death and destruction of climate change no longer create migrants.

I would like to end with a fist up to Honduras. They have an important election coming up where presidential candidate Xiomara Castro is calling for socialism. Like many places around the world, they too are carrying out People’s Assemblies. Here is how they describe it in one of their election cards:

“People’s power in simple words is the power of the people expressed through different forms of participation in major decisions in the life of a country, the political, economic, social, cultural, environmental, international, … moving from a representative democracy to a participatory one, this people’s power must be organized.”

Let us take this cue from the workers in Honduras and workers around the world who are assembling everywhere in righteous struggle. The greatest act of solidarity we can give them is to build the revolutionary movement right here in the U.S., a movement that defeats capitalism once and for all. That is the task at hand.