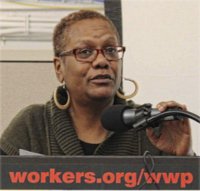 From a WWP Conference talk by Secretariat member Monica Moorehead.

When it comes to the U.S. labor movement, there are very few unions that fit the description of being organizing centers for the entire working class. There are the International Longshore and Warehouse Union Local 10 in the Bay Area, United Electrical Workers Local 150 and Black Workers For Justice.

There is also Steelworkers Local 8751, the Boston School Bus Drivers Union. This union, which our Party had such a significant role in founding, grew out of the struggle against racism, especially the horrific attacks on Black school children who were being bused to all-white schools in South Boston.

The situation in Boston during the early 1970s was very similar to the situation in the Deep South — separate and unequal schools and education. A national march of 25,000 people in Boston on Dec. 14, 1974, brought together people of all nationalities, ages and political experiences under one broad slogan, “Say No to Racism.”

It was a popular way of expressing the right of self-determination for the Black community. For a period of time, this mobilization helped to beat back the racists, but today these same racist forces have reared their ugly heads in an all-out campaign to resegregate the neighborhoods, including the schools.

Enter Veolia — a French-based transnational corporation in over a hundred countries which has a notorious history of union busting, low wages and privatizing services. Veolia is part of a broad conspiracy on the part of the city government and Boston Public Schools to destroy the right to public education. Their first target is the school bus drivers’ union. But as they have witnessed since Oct. 8, when the workers were illegally locked out, they are messing with the wrong union. They expected this union to abandon their leaders, who have consistently fought for their economic and political rights, but they grossly miscalculated.

This union not only fights for the best wages and benefits but also fights for the political rights of the entire class. This union has organized delegations to Haiti; protested against apartheid South Africa; organized for Pride marches; defended Palestinians’ right to their homeland; mobilized for the 2012 March on Wall Street South against the Democratic National Convention in Charlotte; and more.

USW 8751 is all about class unity and solidarity — words that are the antithesis to what Veolia is all about, which are divide, conquer and then destroy. The bus drivers are part of the community. They are rooted in the political movement, and that is why Veolia won’t win in Boston, just as they didn’t win in St. Louis; Sarasota, Fla.; occupied Palestine and elsewhere.

Our WW newspaper is THE paper of the bus drivers. USW 8751 leads the way in the struggle against Veolia and any other union-busting, criminal conglomerate that attempts to break the solidarity of the workers and oppressed. Union busting is disgusting!!