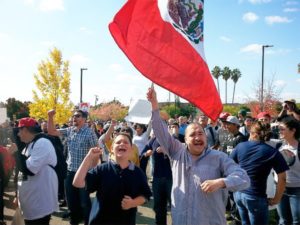 Santa Rosa, Calif. — Thousands of students and community members have taken to the streets to protest the killing of 13-year-old Latino student Andy Lopez, who was gunned down by a Santa Rosa sheriff’s deputy on Oct. 22, as Lopez was returning a replica AK-47 BB gun to his friend’s house.

The anger among this largely Latino/a community is evidenced by the almost daily marches and rallies through the streets of Santa Rosa since Lopez was killed. Students have regularly walked out of the local middle and high schools for the demonstrations. Another march is scheduled for Nov. 5, with a call for a national day of local actions on Nov. 9.

Ironically, the day Lopez was killed, Oct. 22, was the same day that hundreds were marching in Sacramento, Calif., in a statewide demonstration to stop the killing of Black and Brown youth at the hands of police. Families of victims of these killings demanded an end to the protection of killer cops by the “police officers’ bill of rights.” The Justice for Alan Blueford Coalition launched a campaign at the Sacramento demonstration to demand that State Attorney General Kamala Harris prosecute these cops for the killings, starting with Oakland Police Officer Miguel Masso, who killed young Alan Blueford.

In a show of solidarity for all the families, Dionne Smith, mother of 16-year-old James Earl Rivera Jr., who was killed by the Stockton police, paid for a bus to take people from Oakland to the Sacramento protest. She did it again on Oct. 29, bringing a busload of Oaklanders to a demonstration for Lopez in Santa Rosa.

The FBI had originally stated that they were launching a separate investigation to see if there were federal civil rights violations involved in Lopez’s killing. The Press Democrat reported on Oct. 31 that it seemed that the FBI was now “scaling back” its investigation.

Meanwhile, Lopez’s family has filed three claims for damages against Sonoma County. An attorney for the family, Arnoldo Casillas, with Moreno Becerra & Casillas, filed a federal lawsuit on Oct. 31 as well. A press conference about the legal actions is planned for Nov. 4.