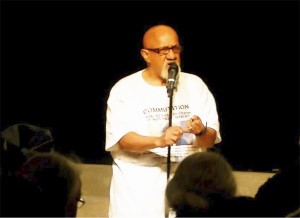 In an inspiring event Nov. 1 at Hibernian Hall in Roxbury’s Dudley Square, the heart of Boston’s African-American community, about 200 people, many of them Boston school bus drivers, attended the Boston premiere of the documentary film “Mumia Abu-Jamal: Long Distance Revolutionary.” The event was emceed by Miya X of the Women’s Fightback Network.

The first of three introductory speakers was Andre Francois, chief steward of Steelworkers Local 8751 and one of the suspended Boston School Bus Union 5. Francois hailed Mumia’s revolutionary determination to fight for justice and connected it to the fight to stop the attack on their union and its leaders by international union-buster Veolia Corporation, which took over the Boston school bus contract in July.

The featured speaker of the evening was Boston City Councilor Chuck Turner on his first day of freedom after serving time on a political frameup by the FBI and the U.S. Attorney General’s office. Turner’s prosecution was motivated by his tireless fight against racism and advocacy for the African-American community.

Many members of the community came out to wish Chuck well on his first day of freedom. Community members prepared a celebration cake reading, “Welcome Home Chuck, we love you — the Community.” Chuck described the U.S. as evil in its actions at home and abroad, and hailed union leaders Kirschbaum and Gillis as being revolutionary in the same sense as Mumia.

The final speaker was Monica Moorehead from Millions for Mumia, a project of the International Action Center. Moorehead participated in a video interview with Mumia in 1996 while he was on death row. Segments of that video are included in the documentary.

Moorehead outlined the role of the decisive mass movement in saving Mumia from legal lynching by the repressive state of Pennsylvania, starting with the 10,000-strong march on Aug. 12, 1995, in Philadelphia when Mumia was scheduled to be executed on Aug. 17. Other important events, numbering in the thousands, eventually led to his death sentence being overthrown and removing him from death row. It is the continuing mass struggle that will win Mumia’s final freedom from life in prison.

The film itself showed and explained Mumia’s extraordinary life journey starting when he joined the Black Panther Party at the age of 14, as a journalist against racist police brutality, to his almost 32 years in prison as the “Voice of the Voiceless.” The documentary, directed by Stephen Vittoria and produced by Street Legal Cinema in association with Prison Radio and Noelle Hanrahan, included interviews and testimonials from dozens of prominent individuals attesting to Mumia’s extraordinary dedication as a revolutionary.