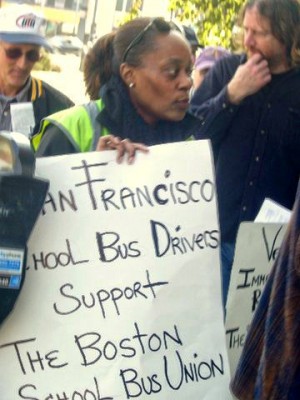 The protesters chanted: “Greedy Veolia! Hands off the Boston school bus drivers!” and “The people have spoken! Veolia’s charter must be revoked!”

Chris Finn, recording secretary of Amalgamated Transit Union Local 1555, coming off a strike of Bay Area Rapid Transit workers, spoke at the rally. He pointed out that Thomas Hock, Veolia’s vice president for labor relations, was the union-busting chief negotiator for BART management during the recent BART contract talks. “Veolia is a union buster,” he said, “and they need to be pushed back now.” Finn expressed support for the Boston school bus drivers in their struggle to protect their contract and working conditions.