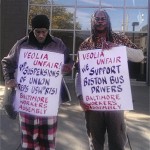 Boston newspapers used every name imaginable to slander the leaders of a fighting union known for having some of the highest wages and best benefits for school bus drivers in the U.S.

If these so-called news organizations had any respect for the truth, they would have directed the name calling at Veolia.

All you have to do is Google “Veolia” and “protest” to find hundreds of articles about the company’s union-busting reputation, support for Israeli apartheid and environmental catastrophes of all kinds.

In a YouTube video of the protest, Peoples Power Assembly leader Larry Holmes referred to Veolia’s long practice of changing corporate names to hide its hideous reputation: “We’re standing outside of one of Veolia’s subsidiaries called SourceOne. They think they can hide by being a subsidiary. We’re here to tell Veolia that they can run, but they can’t hide!”

In Baltimore, on Oct. 21, members of the Baltimore Workers Assembly picketed in front of that city’s Veolia office, where the company runs a para-transit and cab service. Workers Assembly leader Sharon Black went inside and hand-delivered a letter demanding that Veolia stop its union-busting campaign against the Boston union.

The Oakland, Calif., protest on Oct. 19, in front of Veolia’s East Bay Para-Transit office, attracted labor leaders such as Clarence Thomas, member of the executive board of International Longshore Warehouse Union Local 10 and co-chair of the Million Worker March, as well as Dave Welsh, retired postal worker and member of the San Francisco Labor Council. Richmond teacher and union member Judy Greenspan and Workers World correspondent Terri Kay also participated in the picket line, as did a member of the Colombian peoples’ organization, Marcha Patriotica, as well as a bus driver from Amalgamated Transit Local 192.

The protest took place across the street from a Bay Area Rapid Transit station in Oakland on the second day of the subway workers’ strike. Almost at that very moment, two BART workers were killed by an automated train operated by management in a tragic and totally preventable accident.

Safety issues are one of the central issues of the strike, along with increased pension and health care contributions.

It’s no accident that, for its negotiating team, BART hired Veolia Transportation Vice President John Hock at a cost of $399,000. Veolia specializes in getting contracts for city services like water, waste management and transportation by promising local governments to “cut costs” through anti-labor and unsafe practices. n