Oct. 21— Since Oct. 8, the school bus drivers in Steelworkers Local 8751 have faced a continuously hostile barrage from anti-union employer Veolia, Boston Mayor Thomas Menino, Boston Public Schools officials and the corporate media. On Oct. 8, the school bus drivers refused to drive until Veolia agreed to meet to discuss the company’s failure to adhere to the collective bargaining agreement they signed on June 18, 2013.

Since July 1, when Veolia assumed management of BPS transportation, the company has utterly repudiated the union contract, failed to respect the role of the union as the employees’ exclusive representative, and committed numerous unfair labor practices. 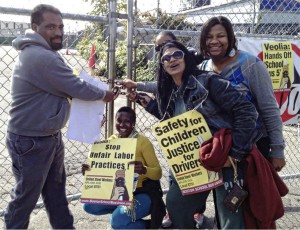 Instead of granting the meeting on Oct. 8, the company ordered the drivers off the property under threat of arrest for trespassing and locked the gates, thus committing an illegal lockout. Workers then faced a relentless onslaught of union-busting media coverage. Headlines, editorials and commentaries claimed workers held a wildcat strike and called for terminating the “instigators.” But the drivers stated they were engaging in protected activity, not a strike.

These Team Solidarity members and USW 8751 leaders are now known collectively as the School Bus Union 5. (Team Solidarity is a rank-and-file coalition of school bus union workers from the Steelworkers, Teamsters and Amalgamated Transit Union.) The discriminatory targeting of these particular leaders represents a calculated effort on the part of Veolia and Mayor Menino to break the organizational backbone and infrastructure of the union.

The Five have decades of recognized militant leadership among the rank and file of Local 8751. Their political activist record of standing with labor and the community in many struggles since the union was founded in 1977 — against poverty, racism and war and in defense of labor’s rights — is well known and respected across the region and across the globe.

The Five are collectively responsible for retirement, enforcement of benefits, civil rights on the job, grievance and arbitration processing from the first step of writing through arbitration advocacy, and the first line of defense of the contract on behalf of the rank and file. Veolia’s vile and slanderous campaign against the Five is not only a transparent effort to intimidate the local membership, but an open attack designed to break the union.

Ever since Oct. 8, Mayor Menino, BPS officials and the corporate media orchestrated a panic, falsely claiming that a “rogue element” in the local continued to instigate the threat of a wildcat strike.

Then on Oct. 18, Veolia General Manager Alex Roman issued a threatening letter to the entire membership of USW 8751, stating that any worker participating in the union’s action called to protest the October Bid the following day would lose seniority rights on their route bid and would be subject to discipline.

On Oct. 19, from 4 a.m. onward, hundreds of workers picketed the gates of the Freeport bus yard to shut down the company’s October Bid. The bid is designed to ensure safe on-time routes for the children and accurate pay for the drivers based on seniority, but Local 8751 viewed this bid as fraudulent given Veolia’s many violations of the contract.

Despite threats from Veolia, Mayor Menino, BPS officials and the corporate media, the workers stood firm chanting as one, “Veolia, we say no! Union busting’s got to go!” They demanded the immediate reinstatement of the five leaders and an immediate stop to any further attacks on the union and its membership. Not a single worker crossed the line to participate in the fake bid.

At 5:30 a.m. on Oct. 19, Charles Clemons, manager of Touch 106.1, Boston’s African-American radio station, joined the protest, both expressing solidarity with the drivers’ struggle and broadcasting live from the picket line. Clemons commended the union for its history of advocating for community issues, such as the successful campaign to save the Grove Hall Post Office, as well as firmly advocating for the rights of its members.

Labor solidarity contingents from UNITE HERE Local 26; American Federation of State, County, and Municipal Employees from Harvard University; and striking workers from “Insomnia Cookies” in the Industrial Workers of the World joined supporters from the Women’s Fightback Network and Team Solidarity members from Brockton Teamsters Local 653 at the picket.

Throughout the morning, Veolia management and the director of BPS transportation harassed the workers, both video recording the action. By 11:30 a.m., Veolia conceded defeat by closing and locking the gates. Once again, Local 8751, in solidarity with labor and the community, scored a victory in its campaign for justice!

On the morning of Oct. 21, steward and Team Solidarity leader Georgia Scott voiced the drivers’ demands and exposed the company’s illegal Oct. 8 lockout on Touch 106.1. This interview was an important step in building support for the School Bus Union 5.

The drivers say they are launching a full-scale campaign addressed to parents and the whole Boston community. Their plans include writing an open letter to the parents; a solidarity meeting hosted by the Committee for Equal Quality Education and the Black Educators Alliance of Massachusetts; and circulating petitions among and conducting a speaking tour addressed to the clergy, unions and community organizations of Boston.

On Oct. 21, USW International Attorney Alfred Gordon O’Connell filed a thorough 65-page brief in response to the “spurious and unsupportable allegations Veolia Transportation has leveled” against the five union leaders. The brief argues that the workers were engaged in protected activity protesting unfair labor practices as defined by the National Labor Relations Act, which was followed by Veolia’s illegal lockout. The meticulously detailed brief concludes, “The Company cannot possibly have just cause to discipline the named individuals and must therefore return them to work at once.”

The battle of the bid demonstrated once again that Local 8751 members are prepared to fight until they win justice. Their struggle represents an inspiration to workers, not only in Boston but throughout the country.

For more information, see
the Team Solidarity website at tinyurl.com/d5tntcg.