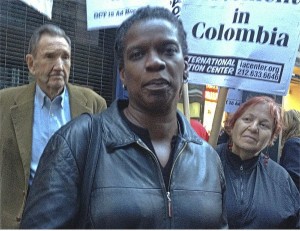 Students in New York City are so right-on to protest David Petraeus’ appointment as a highly paid professor at the City University of New York. Gen. Petraeus, retired from the Army in 2011 after a bloody reign in Iraq and Afghanistan and who was director of the CIA for a year, is a rabid warmonger and absolutely deserves to be thrown out of any educational institution.

On Sept. 24, Petraeus co-authored an article for the Brookings Institute ominously entitled “The Success Story in Colombia.” The writers’ comments are a good example of how the media in the U.S. turn truth on its head. Petraeus solidly represents the interests of the bloodthirsty Pentagon.

Those interests represent U.S. imperialist aims. In Colombia as in all of the Americas that means destruction, repression and death. 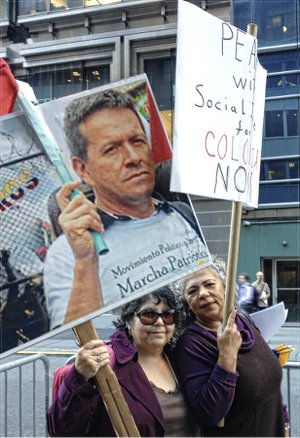 Petraeus et al. wrote: “We are on the right track with Colombia. We need to keep at it to consolidate one of the best stories on the national security front of the 21st century to date.”

These words are chilling in light of the real situation in Colombia.

Over 220,000 have died as a result of a bloody civil war, over a million people have been displaced, most of them campesino/as, Indigenous people and Afro-Colombians.

The U.S. free trade agreement with Colombia passed in 2010 will bring the same kind of havoc that NAFTA brought to Mexican workers and farmers.

Therefore, the call by Colombian unions and mass organizations for the Oct. 15 International Day of Solidarity with the Colombian Peace Process was indeed a welcome development.

The week of October 14, solidarity actions with Colombia were held throughout the U.S. and the world. These actions were critical in light of the dire conditions in Colombia. They were vital in letting the Colombian workers know they are not alone and that the solidarity movement in the U.S. is with them.

The Alliance for Global Justice along with the International Action Center and many other organizations answered the call from Colombia and held solidarity actions in several cities throughout the U.S. that week.

The main demands of the actions were to support the Colombian peace process to demand peace with social justice, to highlight the repression against Colombian unionists and demand freedom for Huber Ballesteros, vice president of Fensuagro, the largest agricultural union in Colombia.

Over a month ago, Ballesteros was arrested and charged with “rebellion.”

There is a worldwide movement demanding his release and there is deep concern for his safety as Colombia is one of the deadliest places for union activists in the world.

The Philadelphia chapter of the International Action Center held a tertulia (open discussion) and presented a video: “Postponed Dreams,” a film by Liliany Obando, former political prisoner and human rights coordinator of Fensuagro, that depicts the conditions of Colombia, and a message from Huber Ballesteros directly from prison.

In New York City and in Los Angeles, where there are Colombian consulates, activists submitted a letter to the consuls detailing the issues progressives are concerned with. The delivery of the letters signed by important leaders in the solidarity movement hit a nerve with these representatives of the bloody Colombian government.

In San Francisco, the call was also picked up by the Bay Area Latin America Solidarity Coalition.

In New York, Oct. 15 Ad Hoc Coalition activists dressed up in business attire and were able to get into the consulate, where they asked to meet with the consul about “business in Colombia.” That may have moved them to the front of the line, and within minutes the delegation was sitting in a conference room with the consul.

To the consul’s surprise, the delegation’s “business” was not free trade business, but the business of demanding freedom for Ballesteros and a just peace in Colombia.

A few hours after the delivery of the letter, the delegation put back on their activist clothes and held a spirited and important press conference and picket in front of the consulate.

Those who participated agreed that the day’s events in New York and around the U.S. accomplished a great deal: it helped the progressive movement to remember Colombia and boosted its solidarity work with this besieged nation.

Colombians in the diaspora in New York City expressed deep gratitude to the solidarity movement for its efforts on Oct 15. They vowed to work with everyone to keep up the movement for peace with social justice and the freedom of Huber Ballesteros and all political prisoners in Colombia. n