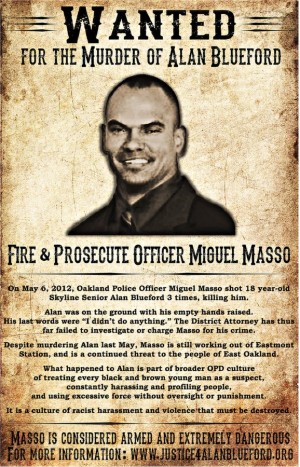 In a letter written to Oakland Police Chief Howard Jordan on Oct. 3, 2012, Alameda County District Attorney Nancy O’Malley announced her findings that “the evidence does not justify criminal charges against Oakland Police [Department] Officer Miguel Masso.” Masso is the officer who killed young African-American Alan Blueford, 18, on May 6, 2012, just weeks before Blueford was to graduate from Oakland’s Skyline High School.

However, significant new information has come out making the DA’s shoddy report even more questionable as to why the DA has failed to prosecute this case. The report fails to examine many disturbing aspects of the case, including why Blueford and his friends were stopped in the first place.

Workers World has learned that an OPD executive review board has found that Masso shouldn’t have given chase. Rather, he should have called in for more help. The review board also found that if Masso suspected that Blueford was armed, he should have kept a safe distance, waiting for backup, instead of closing in as he did. The board was also critical of the fact that Masso’s video camera, which was originally on, was not on during the time when Blueford was killed.

Additionally, Workers World has discovered that Officer Masso, who is an Iraq war veteran, has suffered from post traumatic stress disorder since 2003, which calls into question why the OPD hired him in the first place, much less placed him on a street patrol. Masso reportedly once hit the ground when a cannon was shot off during a parade. He has reportedly applied to the Veteran’s Administration for total disability.

In a related case of police brutality, Ali Winston in the East Bay Express noted: “According to a 2007 civil rights lawsuit, Masso and three other officers were accused of beating, macing, and tasering Rafael Santiago in a holding cell at the 52nd Precinct station house in the Central Bronx. … According to [New York Police Department] documents, Masso resigned shortly thereafter.” (July 25, 2012)

Masso has recounted that he was “in the zone” and had no memory of his shooting of Alan Blueford. In fact, his story about the shooting keeps changing. Being “in the zone” would imply going into some automatic routine Masso may have learned during his military service in Iraq. This, however, does not seem to sync with the turning off of his lapel camera.

The parents of Alan Blueford, along with the Justice for Alan Blueford Coalition, continue to press for the firing and prosecution of Masso. They will be among many families from across the state of California taking their case to the state Capitol in Sacramento on Oct. 22. There, they will demand justice for their loved ones and an end to the notorious practices of stop and frisk, racial profiling and the de facto immunity of police officers from prosecution. JAB is demanding that Kamala Harris, the state attorney general, prosecute the OPD’s Masso, since the county prosecutor, who has never prosecuted any cop, has failed to do so.