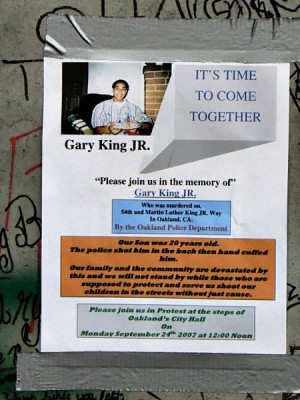 Cathy King, Gary King’s mother, told Workers World that Gary was 20 years old when he was killed on Sept. 20, 2007, in Oakland, Calif. Gary had been selling vacuum cleaners but had that day off, so he went to a friend’s house. Then Cathy got a call from his friend telling her that she had to come to 54th Street and Martin Luther King Blvd.

Cathy recounted how she and her spouse arrived at a police scene. They saw their son on the ground and tried to get to him. Even though she told the police she was his mother, they wouldn’t let the two get close. She was again turned down when she asked if she could ride in ambulance. When the two tried to follow the ambulance, they realized after a while that they had gotten ahead of it. The ambulance had turned off its siren.

Cathy was able to piece together from friends and other eyewitnesses the following information: Gary was outside of a corner store with friends. Officer Patrick Gonzales claimed he suspected they were dealing drugs. Gonzales called Gary over to his car and asked him his name. Then he tried to put him in handcuffs. When Gary resisted, Gonzales grabbed Gary by his braids, tased and then shot him. Officer Richard Coglio claimed that when he rolled Gary over, he found a gun on him. Gonzales claimed Gary kept reaching for it, but Coglio testified that Gonzales never warned him that Gary was armed.

Patrick Gonzales is one of Oakland’s most notorious killer cops. In 2001, Gonzales was accused of strip searching a young man in broad daylight and then dislocating his jaw. In March 2002, he shot and killed Joshua Russell for allegedly being involved in an armed robbery.

Writer Ali Winston in his article “Deadly Secrets,” about police violence against Occupy Oakland and about “the two most violent confrontations between police and Occupy protesters,” wrote: “The Tango squads armed with less-than-lethal projectiles and chemical munitions were posted at 14th and Broadway in front of City Hall on the evening of October 25 and were led by Sergeants Patrick Gonzales and Ronald Holmgren.” (East Bay Express, Oct. 12, 2011)

In a follow-up article Winston described how Gonzales, who had an extensive history of use of deadly force, “also fired bean bag projectiles from his shotgun during a clash with marchers on the afternoon of the 25th.“ (“OPD Used Violent Cops Against Occupy,” Dec. 21, 2011)

The Alameda County District Attorney finally released a report in April 2013, almost six years later, absolving Gonzales of any wrongdoing in Gary King’s killing. In an article about the report, “Oakland Police Too Quick to Fire,” Thomas Peele wrote about how Gonzales claimed in testimony that he had found the gun in King’s pants after cuffing him. “‘The difference in the two accounts is just huge,’ said LaDoris Cordell, San Jose’s independent police monitor and a retired Santa Clara County Superior Court judge who reviewed the case for the newspaper.

“She said the discrepancy calls into question whether Gonzales knew King had a gun when he shot him. ‘As a firearms instructor, Gonzales would have known to warn Coglio if he believed Coglio was approaching an armed man,’ Cordell said.” (San Jose Mercury News, May 2)

Peele described the testimony of Sgt. Donna Hoppenhauer, the internal affairs investigator, who never mentioned the conflicting reports, with Coglio claiming he also found the gun. Peele wrote, “Shortly after Hoppenhauer’s testimony, Oakland agreed to pay King’s family $1.5 million to end the lawsuit. Gonzales, by then, was back on the street.”

Cathy King, who described how police murders only happen to people of color, told WW how they had a vigil right after Gary was killed. An artist painted a mural of Gary on a Bay Area Rapid Transit pillar near where he was killed. Protests were held every Thursday at Oakland City Hall for a period of time. A major protest was held on the day Gonzalez was supposed to go back to work.

When asked what she hopes will come from the upcoming California statewide anti-police brutality demonstration on Oct. 22, Cathy thoughtfully talked about her “hope for some recognition,” saying, “We need a million-person march in D.C.”

She expressed how she wants “the world to know that it happens all the time” and “the police [should] not be allowed to kill people with immunity. It should be illegal for them to give each other awards for killing people. They pat each other on the back. There should be programs for the victims’ families. They don’t even call my son a victim; they call him a suspect. Many families never receive counseling, although they are completely devastated. No, the president didn’t end racism.”

Sadly she admitted that for a while after Gary’s killing, “I had no ambition for my other children except to stay alive.”