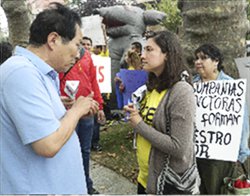 Immigrant workers at Well-S Inc. construction company, who are owed $94,000 in back wages and damages, have been fighting their case in court. On Oct. 6 they took their demands directly to one of the bosses at his home in Queens, N.Y. The ­protest was called by NICE (New Immigrant Community Empowerment), which was ­recently ­organized by two Latinas, and supported by activists from a number of ­organizations, including the Laundry Workers Center.