By a representative of locked out workers
Washington, D.C. 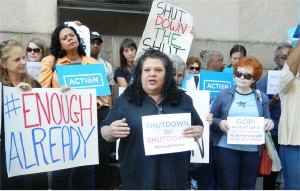 On Oct. 1, the federal government shut down most of its agencies, which basically locked out 800,000 federal workers. According to J. David Cox, national president of the American Federation of Government Employees, in an interview with PBS NewsHour: “I actually prefer to call it a government lockout because employees are being locked out of their jobs. Our members want to go to work today. They want to serve the American public.” (pbs.org, Oct. 3)

He also stated that the lockout was devastating for federal workers as well as people relying on public services.

The lockout comes only weeks after thousands of federal workers were “furloughed” for seven days and are desperately trying to recoup the economic losses that they have had. This time the excuse from the most reactionary members of the House of Representatives is that they want President Obama to negotiate “changes” to the Affordable Care Act, otherwise known as “Obamacare.”

Although the ACA, which is now the law, has many flaws and has become an economic windfall for the medical and pharmaceutical industries — as well as sections of the law being opposed by some unions — the Tea Party-driven Republicans want to use federal workers as pawns and hold them for ransom.

It would, however, be a mistake to view this crisis as the responsibility of one or the other political party. Instead, the crisis is a result of the worldwide effort of the capitalist class to impose austerity and cutbacks on the international working class, and part and parcel of the efforts of neoliberalism to drive back the hard-fought gains of the working class that were won for the past 75 years. From Athens, Greece, to Detroit to South Africa to Wisconsin, austerity and cutbacks in wages, public services and pensions, reducing the living standards of the global working class is the end game for an economic system in a downward spiral.

Besides the AFGE national leadership calling for mass actions and protests, there are many AFGE locals across the country that have initiated demonstrations.

AFGE Local 17, representing the Department of Veteran Affairs, plans to call for another rally on Oct. 11 from noon to 3 p.m. on the west front of the U.S. Capitol Building. Local 17 President Bill Preston has invited friends, families and any allies to fight back this attack to help broaden the struggle of federal workers. He also states in a leaflet announcing the rally that any homemade signs to express to Congress feelings about the lockout are more than welcome.

At the Oct. 4 rally, Johnny Zuagar, an African-American U.S. Census Bureau employee and president of AFGE Local 2782, stated to the Metro Washington AFL-CIO Council News: “I don’t know what bills to pay. I am afraid I am going to lose my house. I don’t know how it got to this.”

At the same rally, which turned out hundreds of federal workers, a Federal Aviation Agency inspector and shop steward for AFGE Local 1653, Dan Ronberg, expressed his anxiety over the dangerous situation created by the lockout of 800 other federal aviation inspectors.

Another employee, Melissa Howard, a civilian employee of a Child Care Development Center at Fort Meade, Md., told of her anger at having to borrow money from infamous “Pay Day Loan Centers,” which charge exorbitant interest rates, in order to pay some of her bills. She said, “It’s a choice between fuel or food.”

An employee on an AFL-CIO blog said: “The duty of the federal government is to keep the citizens safe and secure. In other words, take care of us. Sacrificing the workers for the benefit of corporations in this New World Order, the protection of labor has been left out of every free trade agreement or completely ignored. Does this sound safe and secure? Not one consideration of what this would do to American workers, putting us in direct competition with the workers in other countries that make a dollar a day. Our government set all of this up for corporate profit and does not give a damn about citizens of this country.”

This blogger, however, has it only partially right. We should not be in competition with workers from other countries; we should be in solidarity with them in their struggles.

It is the capitalist class and imperialism that puts us in “competition” with each other. The U.S. labor movement needs to interpret the union slogan, “An Injury to One Is an Injury to All,” to include all workers living under capitalism, in order for workers to understand the global ramifications of both the current attacks and the fightback. A better world is possible! It’s called socialism!