The following statement was issued by the Southern Workers Assembly on Oct. 8. 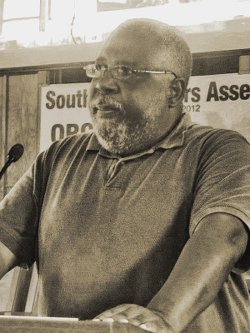 The opening trial for the 940 North Carolina Moral Mondays Campaign arrestees started with the case of Saladin Muhammad, a long-time North Carolina and U.S. national labor and social justice activist, on Oct. 4, 2013, in the N.C. District Court, where he was found guilty by a judge for trespassing, disorderly conduct and violating rules of the General Assembly while peacefully protesting with others on government property.

Muhammad was arrested on May 13, 2013, with 48 others protesting at the N.C. State Legislature against the anti-worker and racist laws that were being proposed and enacted as part of a national corporate-financed campaign to eliminate vital social programs and basic democratic rights that have been won by labor, the Black Freedom Movement (often referred to as the Civil Rights Movement) and other social movements over the past 100 or so years.

Muhammad, a founding member of Black Workers For Justice, led the organizing as an organizer of the national United Electrical Workers Union (UE) that formed the North Carolina Public Service Workers Union-UE Local 150, which has been a leader in the campaign to repeal the N.C. state ban on collective bargaining rights for public sector workers. That included getting a ruling from a complaint filed with the United Nations International Labor Organization (ILO) finding North Carolina and the U.S. out of compliance with international laws and treaties by its denial of public sector workers’ collective bargaining rights. Despite the ILO ruling, North Carolina and the U.S. have refused to comply with the U.N. agency ruling.

The North Carolina legislature is now pushing to enact its anti-labor, right-to-work law as an amendment to the N.C. State Constitution, banning the right to collective bargaining for public sector workers, which would prevent private sector workers from using card check in efforts to form unions. This right-wing push to deny labor rights as a constitutional provision raises the urgency of the need to build a powerful statewide, South-wide and national campaign for labor/workers rights to protest and organize.

Worker Speak-Outs were organized in several North Carolina cities by the Southern Workers Assembly, an initiative led by UE Local 150 that brought together rank-and-file workers and leaders to talk about the conditions facing workers on the job which are being shaped by the legislative climate. Many workers stated that the anti-worker climate is increasing management’s abuse of power against basic worker and labor rights on the job.

As active participants in the Moral Mondays Campaign, UE 150 and Black Workers For Justice, which are close allies, invited rank-and-file workers and leaders from other unions and worker organizations to be part of the first Moral Mondays labor rights delegation to protest against the attacks on labor and worker rights at the N.C. General Assembly.

As North Carolina is a target state for corporate-financed, right-wing movements and organizations like the Tea Party and the American Legislative Exchange Council for modeling anti-democratic legislation for other states throughout the country, and especially in the South where industries are relocating in large numbers.  We believe that the state of North Carolina started with the Muhammad case to send a strong message that rank-and-file labor social movement activism demanding labor rights and other democratic rights will not be tolerated.

Dr. King’s last demonstration in Memphis, Tenn., in support of the right to collective bargaining for Sanitation workers, points out that when the right of workers to organize and mobilize power in movements and campaigns like Moral Mondays for civil, democratic and human rights for working-class and poor people, especially the most oppressed in the case of Black workers, workers of color and women, the courts, the anti-democratic forces in all levels of government, and the most extreme elements promoting racial hatred and divisions among the people will make every possible effort to defeat this converging movement of democratic people’s power.

Prohibiting the right to protest against the General Assembly is an attack on an international human right and the U.S. Constitutional Rights of Freedom of Speech, Freedom of Assembly and Freedom of Association to voice grievances against injustices and violations against all human rights carried out by the government and corporations. Exercising the right to protest was core to Black people, labor and other social movements winning voting, labor and other social and political rights. Muhammad’s case is part of the struggle for labor to mobilize its power to protest and shape public opinion and to defend against attacks on and to fight for the advancement of labor and all human rights. Muhammad’s appeal of the guilty ruling is a fight against criminalizing labor’s right to mobilize the rank and file in protest.

We feel that Muhammad’s case should be used to help build a national and international rank-and-file and human rights movement campaign in defense of the right of labor and social movements to actively protest against government and corporate attacks and denial of human rights. It is important for labor and rank-and-file workers to be in the forefront of this campaign, as it represents a fundamental aspect of mobilizing labor and peoples’ power to defend and fight for advances in democratic rights and radical changes that address the needs of the majority of the people, not just the corporations and the rich.

We call on rank-and-file workers, their unions and other social, community and faith organizations to:

Sign online petitions and send letters to the N.C. governor, President Obama and the N.C. District Court demanding that the charges be dropped against Saladin Muhammad and all of the Moral Mondays arrestees.End the legislative attacks on labor and worker rights.Apply the ruling of the ILO by repealing the ban on public sector collective bargaining.Carry out of the AFL-CIO 2013 national convention resolution to organize labor in the South.Set up union and community meetings for labor rights’ arrestees to speak and help spread the struggle.Wear yellow wristbands as an act of solidarity with the struggles for labor rights in North Carolina.

We call on unions, worker organizations and all organizations and networks committed to labor and human rights to sign on as endorsers of this Campaign to Drop the Charges against Saladin Muhammad and All Moral Mondays Campaign Arrestees and stop the criminalizing of the right to protest by sending contact information and resolutions that can be publicly posted on Southern Workers Assembly literature, websites, etc., to [email protected]

In societies and systems where the majority of the people must work to earn a decent standard of living to support themselves, their families and communities, their engagement in protests to make changes that improve conditions of workers at all levels of society is a human right.

In the Spirit of Moral Mondays and Its First Rank-and-File Labor Delegation: Forward Together, Not One Step Back!