By Paddy Colligan and G. Dunkel 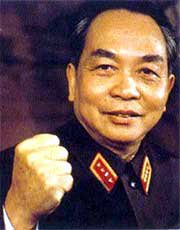 He was the founder and first leader of the Vietnam People’s Army and helped to develop and applied the concept of “people’s war” that the Vietnamese used first to defeat the French colonial rulers in 1954 and later to drive U.S. imperialism and its puppets out of South Vietnam in 1975.

Giap envisioned the Vietnamese army as an instrument for organizing the masses to carry out a military struggle that would lead to a political revolution.

The clearest example of the power of people’s war came in the 1954 two-month-long siege of the French colonial army, which was well dug in at Dien Bien Phu, a remote area in northwest Vietnam.  The battle was waged by 100,000 soldiers and another 100,000 workers –- mainly women –- who were employed to do the logistical work the 100,000 soldiers required. With this battle, the Vietnamese army forced the French army to surrender. France had to leave Vietnam.

Even though the French artillery and the French air force inflicted heavy casualties on the soldiers and the workers directly supporting them, Vietnamese morale didn’t crack.  The fighters and those supplying them knew they were fighting for Vietnam’s national independence, their national sovereignty and their homeland. They also knew that a liberation struggle led by a Communist Party would mean enormous social gains for the peasants and workers.

The liberation war to drive out U.S. imperialism was longer and more intense because the United States was militarily much more powerful and wealthier than France.

The U.S. lost 58,226 soldiers in its war against Vietnam and suffered several thousand missing in action. These losses, coming in a period of political awakening inside the U.S., especially of the Black Liberation struggle, were more than enough to turn U.S. popular sentiment against the war.

Vietnam released figures on April 3, 1995, that a total of 1 million Vietnamese combatants and 4 million civilians were killed in the war. The accuracy of these figures has generally not been challenged. Even after killing all these people, U.S. imperialism was unable to break the will of the Vietnamese to wage a people’s war for national sovereignty and liberation.

Vietnam is still suffering from the chemical warfare the U.S. used against it. Even now, 40 years after the Pentagon dumped millions of gallons of Agent Orange on its soil, Vietnamese children are still being born with severely disabling physical and mental abnormalities caused by contamination of the environment and its genetic legacy.

(For more information on Giap and his role in the struggle against French and U.S. imperialism, please see workers.org/2011/world/giap_0908/.)