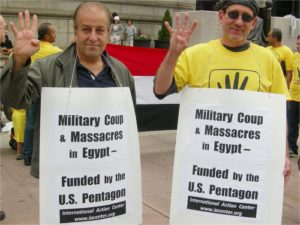 Outraged by the continuing massacres and crimes of recently extended martial law committed by the U.S.-backed Egyptian military following its July 3 coup d`etat, the newly-formed Egyptian Americans for Democracy and Human Rights, New England (EADHR) took to Boston’s Copley Square on Sept. 14 “to show solidarity with the freedom loving people of Egypt.” 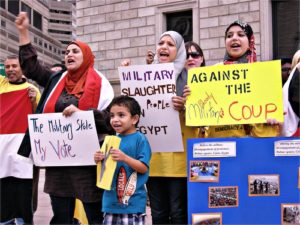 Demonstrators, including many children, wore bright yellow shirts emblazoned with what has become an international symbol of solidarity with resistance to the Egyptian military’s bloody coup, a four-finger salute. Mohammed Morgan, a protest organizer, explained that the use of the symbol — based on “Rabba,” an Arabic word for “fourth” — is meant to show support for the thousands of anti-coup protesters who were brutalized, with hundreds killed, when the military attacked and destroyed the Rabaa al-Adawiya protest camp and mosque on Aug. 14. Even showing the Rabba symbol on the streets in Egypt is a courageous act of defiance, as the military has shoot-to-kill orders for even such symbolic protest.

Anti-coup Egyptians were joined by Palestinian activists on Sept. 14. They spoke of the extreme suffering and deprivation in Gaza since the Egyptian military closed the border to supplies following the coup, further assisting the Israeli colonial state in its criminal blockade and occupation of the Palestinian nation.

Members of the International Action Center came in solidarity with the rally and to underscore protesters’ demands that the U.S. immediately cease its massive financial, military and political support for the Egypt generals and the wealthy ruling class they prop up.

Tens of thousands of people in Boston’s downtown area heard, many for the first time, how the coup is attempting to destroy the first democratically elected government since Mubarak’s ouster from power in 2011. Many stopped to express their agreement that the U.S. needs to stop funding, causing and prosecuting wars throughout the Arab world.

In a statement titled “Egyptian Democracy Derailment,” the EADHR pointed out that resistance to the coup is a continuation of the movement when, “In January 2011, the Egyptian people took to the streets in peaceful mass protests that quickly became a people’s revolution to bring down the authoritarian, corrupt military government of 30 years. The people’s demands were highlighted by three basic aspects of human rights: an Honorable Living Standard, Freedom, and Social Justice.”

The EADHR statement concludes, “We stand with people of conscience throughout the world in condemning the Military Coup and all crimes it has committed against basic Human Rights. Elected Authorities and Rule of Law must be immediately restored. Furthermore, military and civilian officials with the blood of Egyptians on their hands must be held accountable for their crimes and brought to a quick and fair trial.”