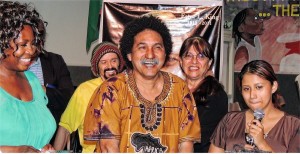 Jesús García, Venezuela’s former ambassador to Angola and a researcher and writer, spoke to a packed house at S.H.A.P.E. Community Center in Houston’s Black community on Sept. 14 on the African Diaspora and Racism in the Americas and the Caribbean.

García, a leader of the Afro Venezuelan Movement, spoke about the progress on the issues affecting African descendants during the presidency of the late Venezuelan president, Hugo Chávez.

Speaking with the passion of an activist, García described the legacy of racism that followed the end of Spain’s centuries-old slavery in Venezuela and explained that areas of the country with the largest African-Venezuelan populations had the highest levels of poverty.

Since the first election of President Chávez in 1998, progressive changes have been gradually instituted to address the problems faced by the African-Venezuelan community and to extend to them important social, political and economic rights. Chávez himself was the first president in Venezuela’s history to publicly claim and honor his African and Indigenous ancestry.

Many in the audience were surprised to learn that there were over seven million Venezuelans of African descent.

Interspersed between the evening’s speakers was African drumming by Runyararo Fana and Baba Ifalade.

The evening of discussion on the significant changes brought about during Venezuela’s Bolivarian Revolution ended with the presentation to Garcia of a beautiful cake with his photo on it, dancing to Venezuelan music and a dinner of Persian food.