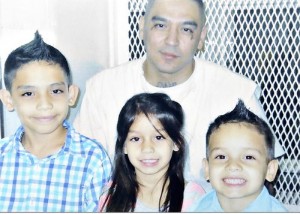 Robert Garza on death row with his three children. He was executed Sept. 19.

In just one week in September, several events surrounding the death penalty in Texas go to the heart of its criminal inhumanity.

With the Sept. 19 execution of Robert Garza, many were shocked that a person who killed no one could be executed. Yet he was, like countless others. Garza was the only person tried under Texas’ Law of Parties and sent to death row after four women were murdered in the town of Donna in Rio Grande Valley, South Texas, in 2002. As Garza recently told a reporter: “Who and where was the party? I was the only one convicted in this Law of Parties case.” (deathpenalty­news.blogspot.com, Sept. 18)

On Sept.18 — one day before Garza’s execution — at a press conference, the American Bar Association’s Death Penalty Due Review Project released a 500-page report distributed to political leaders at the state Capitol in Austin. The team found a system riddled with flaws and shortcomings which undermine public confidence that innocent defendants will not be wrongfully executed.

Focusing on the fairness and accuracy of Texas’ death penalty system, the report found that “in many areas, Texas appears out of step with better practices implemented in other capital jurisdictions, fails to rely upon scientifically reliable methods and processes in the administration of the death penalty, and provides the public with inadequate information to understand and evaluate capital punishment in the state.”

Though not part of the eight-member study team, former death row prisoner Anthony Graves — exonerated after more than 18 years in prison for multiple murders he did not commit — was invited to speak at the news conference.

Graves calls himself living proof that the system is flawed, stating: “I had two execution dates. I was almost murdered by the state of Texas. Had these recommendations been in place, you probably wouldn’t even know my name today.”

Graves was exonerated in 2010 after a federal appeals court said the prosecutor intentionally withheld evidence that could have helped his defense. He has since been working nonstop to prevent other cases of innocent people being sent to death row and also working to end the practice of keeping all death row prisoners in Texas in permanent solitary confinement.

Texas recently reported that its supply of pentobarbital, the single drug used in executions, was expiring but their execution drug protocol would not be changed. This news was bizarre since there are now no drug manufacturers who are willing to sell their drugs to prison systems to be used for executions. “We have not changed our current execution protocol and have no immediate plans to do so,” Texas Department of Criminal Justice spokesperson Jason Clark said in a statement to the Associated Press. (Sept. 20)

Activists based in Europe waged a serious struggle which finally resulted in the lack of execution drugs available to states within the U.S. that participate in capital punishment.

“How can anyone believe that what goes on with the death penalty is fair or logical? We know that the system is broken beyond repair,” Joanne Gavin, a longtime activist with the Texas Death Penalty Abolition Movement, told WW. “With the execution of a man who did not pull a trigger, with the ABA report citing one wrong after another, with Texas scrounging for drugs to satisfy its addiction for legal lynchings — it is ludicrous for this racist madness to continue one more day.”

Texas has six more executions scheduled for 2013 and three already set for 2014. On Sept. 26, Arturo Diaz is to be executed in Huntsville. Garza’s execution was number 504 for Texas since executions resumed here in 1982 and the 12th this year.