This reporter is interviewing a few of the many families of victims of police killings in California as they are mobilizing for a statewide protest in Sacramento on Oct. 22, as part of a National Day of Action against Police Brutality. Other interviews will be published in the weeks leading up to Oct. 22. 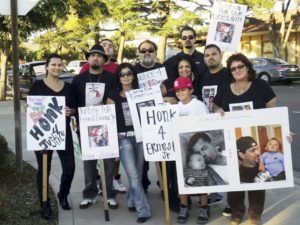 Manteca, Calif. — On June 8, 2011, Ernest Duenez, Jr. was shot to death by Manteca police as he was exiting from the backseat of a truck, with a gun trained on him by officer John Moody. The shocking video which shows the killing is posted at tinyurl.com/muru7x4. It has been viewed by nearly 300,000 people.

As Duenez explained to this reporter: “My son was considered a parolee at large, because he had tested dirty on a drug test, after he had been clean for almost a year. He was a new father, and was really trying to do his best. He was only two months from being off of parole for good. The cops ran with the drug test as a personal vendetta. The parole officer had put out a warrant for his arrest because of the drug test. Ernest had told me, ‘I promise I will turn myself in after the baby’s first birthday.’”

Duenez discussed the family’s civil suit against the Manteca Police Department: “Our attorney, Ben Nisenbaum of John Burris’ law firm, hired a forensic expert to review the DA’s report and police video. They [the DA’s office] say they see a knife, then they say they can’t see it. They claim the camera can’t pick it up because ‘Ernest threw it so quickly.’ Our forensic expert sees no knife. Shell cases, however, are visible. The DA report says Ernest threw the [alleged] knife after the third shot hit his arm.”

The civil suit will be heard in the Eastern District Court in Sacramento by Judge Lawrence Karlton on March 25, 2014.

Duenez continued, “We have a lot of support from family and friends locally. I’m really grateful. A lot of it has to do with the video — once they see it, and how John Moody treated my son, even after they shot him.

“We feel that we’re not just fighting for our son, but for all the families who have lost loved ones. We’re trying to keep other families from going through what we have gone through. Last night, a young girl privately messaged me about her brother who was killed 12 months ago. She felt very much alone. I spent a couple of hours messaging back and forth. I’m limited because I work six days a week and am in a secluded location outside of the Bay area.”

When asked about the Oct. 22 statewide demonstration, Duenez stressed, “This will be a great event, even if we don’t get to talk to people in positions of power. It will be a powerful display of the unity of all of us, bringing awareness to the public. They’re setting up meetings with staff of the various legislature representatives. I think this will help in the overall struggle.

“They should think about changing the rules related to police shootings, where they’re held accountable just like ordinary citizens are held accountable. They should be drug tested. They hide behind the Policeman’s Bill of Rights. They could be having mental or drug problems, but we can’t find out because they’re protected by the Policeman’s Bill of Rights.”

Duenez explained, “Some police who don’t commit these crimes are afraid to stand up and point out what’s going on, because the other ones won’t have their backs. We all are required to be drug tested if we have an accident. If they [the police] shoot someone or beat someone up, they should have to have independent reviews. Even the local media won’t print things the local police tell them not to print.”

When asked about the California attorney general’s role, Duenez gave her view: “I’m disappointed in Kamala Harris, who was played up as a civil rights advocate, yet she is completely silent on cases of police murder and police brutality. Helping take down bad cops is not good politics for re-election. She should do more for the people who elected her.”

Duenez encouraged supporters to come to Sacramento on Oct. 22 to protest police brutality.