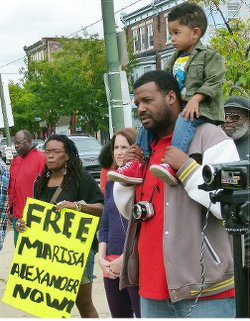 Dozens of people gathered in Philadelphia on Sept. 14 as part of a Nationwide Day of Rallies calling for Justice for Marissa Alexander, a mother of three children incarcerated in Florida after attempting to defend herself from an abusive spouse who had previously injured her.

Alexander, who is African-American, fired a warning shot into a wall to ward off her estranged spouse, who was threatening to kill her. No one was killed or injured, yet Alexander was convicted of aggravated assault with a deadly weapon. Despite Florida’s “stand your ground” self-defense law that let George Zimmerman walk free after murdering Black teenager Trayvon Martin, Alexander was sentenced to 20 years. Florida State Attorney Angela Corey was the prosecutor in both cases.

In Atlanta, the gazebo behind the Old Courthouse in Decatur was the site of a rally in support of Alexander’s freedom. Attendees wrote messages on postcards to Marissa, signed petitions to the governor of Florida and listened to rally speakers, many of whom work with women survivors of abuse and women prisoners and their families.