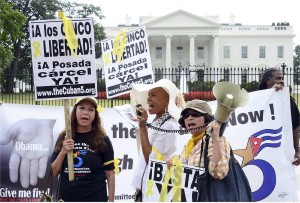 Photo: International Committee for the Freedom of the Cuban 5

Cubans festooned their island with yellow ribbons on Sept. 12, marking the 15th anniversary of the arrest of five Cuban men in Miami. Even the Washington Post, which has ignored or been hostile to the campaign to free the Cuban 5, published an Associated Press article that day headlined “Havana dresses up with yellow ribbons in campaign to push for Cuban 5 agents’ release.”

In Washington, D.C., the International Committee for the Freedom of the Cuban 5 took yellow ribbons to the White House sidewalk in a spirited and noisy lunchtime “vigil” on the Sept. 12 anniversary. White House security refused to accept a hand-delivered letter to the president.

The letter read in part: “We ask you once again to make use of your prerogatives as President of the United States and immediately free Gerardo, Ramón, Antonio and Fernando. The entire world is waiting for a gesture from you to end this colossal ­injustice. The entire world is ‘watching.’”

The Cuban 5 were imprisoned in 1998 for the “crime” of defending their homeland. Gerardo Hernández, Ramón Labañino, Antonio Guerrero and Fernando González remain in various federal prisons, with Hernández dealt an outrageous sentence of double life plus 15 years.

The yellow ribbon campaign was initiated by René González, who completed his full sentence and is home in Cuba with his family. Famous Cuban artists, including Silvio Rodriguez, videoed a stirring rendition of “Tie a Yellow Ribbon Round the Ole Oak Tree.”

The vigil at the White House was part of the East Coast tour by author Stephen Kimber, who is introducing his new book,”What Lies Across the Water: The Real Story of the Cuban Five.” (Winnipeg, MB: Fernwood Publishing, 2013)

Three events in Washington, D.C., concluded with an emotion-filled cultural evening of solidarity at the Venezuelan Embassy’s Bolivarian Hall on Sept. 13. Activist actor Danny Glover made a surprise appearance, speaking not only for the freedom of the Cuban 5, but for an end to the U.S. blockade of Cuba.

This event included a tribute to writer and filmmaker, Saul Landau, who died of cancer on Sept. 9. His support for the Cuban Revolution, which began shortly after the 1959 Revolution, was the subject of many of his movies, books, articles and lectures. Landau had visited Hernández in prison many times, accompanying Glover.

Three events in New York City were capped off with a meeting on Sept. 16 initiated by union leaders from the American Federation of State, County and Municipal Employees, demonstrating how the movement to free the Cuban 5 is growing.

Kimber’s book is an important tool to inspire the “jury of millions” within the United States that has the ultimate power to open the prison door for all of the Cuban 5. The book tour will end in Boston on Sept. 17 where Noam Chomsky will join Kimber at a program at Massachusetts Institute of Technology.

For more information on the struggle to free the Cuban 5, see theCuban5.org.