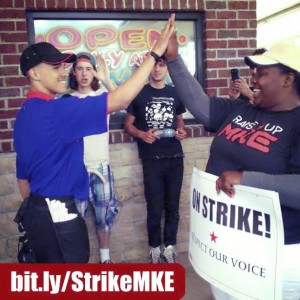 Workers from 65 low-wage, billion-dollar businesses in Milwaukee walked off the job on August 1 demanding a union and a raise in the minimum wage to $15 an hour. Later that day, roughly 250 people gathered outside a shopping and fast-food complex on Miller Park Way, a major intersection near the Milwaukee Brewer’s baseball stadium that is swamped with fast-food restaurants. The one-day strike was organized by Raise Up MKE.

“The fight today is for union rights, but also for human rights and social rights,” the Rev. William Briscoe, president of the faith-based coalition, Milwaukee Inner City Congregations Allied For Hope, said at the Miller Parkway rally.

Right before the police started escorting a few of the protesters away for not moving, Milwaukee state legislator, Mandela Barnes, climbed on a truck bed and said, “We had to have the back of the strikers because what they did was a brave thing today.” The protesters booed the police action and started to march around, singing union songs, drumming, and shouting, “What’s injustice? Poverty wages! What do we want? $15 and a union!”

Representatives of the Milwaukee teachers union, the Service Employees union, the Steel Workers’ union, union nurses, Wisconsin Jobs Now, Voces de la Frontera, the WI Bail Out the People Movement and other labor-community organizations were there in solidarity with the workers.

“It’s beautiful and we need more of it,” said Angela Walker, legislative and political director for the Amalgamated Transit Union Local 998.

For more information and to sign a petition to support the low-wage workers, visit lowpayisnotok.org.