In solidarity with the prison hunger strikers now in their fourth week of refusing food, hundreds gathered at the Downtown Federal Building in Los Angeles on July 31 to demand an end to the state-sponsored torture going on in California’s prison system’s Security Housing Units (SHUs) and that prison and state officials meet all of the strikers’ demands regarding the right to basic mental and physical health care and food.

According to Amnesty International, conditions in the SHUs blatantly violate the U.N. Convention against Torture and the International Covenant on Civil and Political Rights, which was ratified by the U.S. Many of the protesters were also family members of the courageous striking inmates. 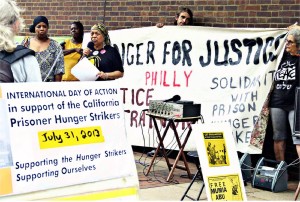 Pam Africa speaks at a rally in front of the Philadelphia Federal Building on July 31, in solidarity with the California prisoners’ hunger strike.

Among the activists attending the rally was actor Danny Glover, whom the Los Angeles Times quoted: “Malcolm X said, ‘We talk about jail, we all in jail.’ We in jail because the power defines us! We have to create a system that works for us.” (July 31)

On July 22, prisoner Bill Sell died while participating in the hunger strike.