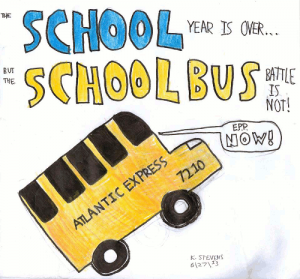 Fighters for the rights of both New York City school bus workers and the students who need their services remain determined to keep up the struggle following a series of ups and downs in the first half of 2013.

Billionaire Mayor Michael Bloomberg’s December 2012 Request for Bids, which removed the seniority hiring and benefits known as Employee Protection Provisions from 1,100 bus and van routes, provoked a strike in January and February by 8,800 members of Amalgamated Transit Union Local 1181 — mainly women from immigrant and other working-class communities.

Despite the hardship this lack of transportation created for some 150,000 students and false claims by the administration that EPP was illegal, support for the strikers’ demand for job security reached new highs among bus riders’ families. This was especially true for those who had already been seeking to improve other aspects of how special-education busing is handled, such as Parents to Improve School Transportation (PIST), with its School Bus Bill of Rights campaign.

After four-and-a-half weeks of striking, union leaders became convinced that a fair settlement could not be negotiated with the “mayor of Wall Street” and chose to call off the strike, but to seek other political and policy approaches to restoring EPP. The bids went forward this spring and were approved by the Panel for Education Policy, which has a majority of Bloomberg appointees.

These workers, many of whom have 20 or even 30 years’ experience, must now either reapply for these K-12 special-education routes (with pre-K runs tacked on during the middle of the day!) at $10 to $15 an hour or seek early retirement.

‘Why is the safety of our children up for bidding?’

Parent activists are angry that senior bus crews will be replaced by a wave of inexperienced people with less safety know-how. They are predicting high rates of error, accidents, burnout and turnover.

Johnnie Stevens, father of a mini-wagon rider and PIST member, told Workers World, “A city that cares for its youth would not trash a workforce that has provided educational access — a civil right — for decades. The well-being of students and communities should come before corporate profits.”

A combination of unknown non-union contractors that have never transported NYC school children before, and one company (Little Richie) that has a reputation — attested to by complaints from parents from the outer boroughs — of using vehicles in bad condition and that has basically a company union, will be handed the 1,100 routes in September. The Panel for Educational Policy approved this deal by a 6-4 vote in late May, over the loud protests of parents and 100 uniformed school bus workers in the meeting hall.

Long-time school bus drivers and matrons, who went on strike in the dead of winter to prevent the above scenario, are furious. “The new contractors plan to treat busing like an assembly line. They’ll have to find people to hire … the experienced ones won’t want to be part of the degrading of this profession,” Maria Gentile, who has 36 years experience, told PIST. She added, “When will the matrons and drivers get training or drug testing if they are doing three runs a day? How will they have car seats for pre – Kindergarteners if there are big kids on the same bus?”

Gentile asks the public to urge New York Governor Andrew Cuomo to sign S 5848, also known as A 8060, which requires comprehensive training and job security measures for those transporting students with disabilities.

The workers forced out in June join about 74 others whose companies (Tufaro and Rainbow) refused to put them back on buses in February. These lockouts led to National Labor Relations Board cases, which were unsuccessful in restoring jobs as of July 8. Parent complaints about the resulting chaos restored at least one driver’s job, but as 20-year driver Theresa Giordano told PIST, “The rest of us now feel pressured to retire to keep our benefits.”

Terminated and active members of ATU 1181 are all owed back wages by school bus companies, which illegally imposed a contract this spring with 7.5 percent cuts and theft of accrued (vacation) pay. Many fear that by the time the NLRB settles the case, company heads will try closing to avoid paying, although most of the owners have other assets.

Parents such as Milagros Cancel, Bronx PIST leader and mother of three bus riders, agree with school bus workers that the NYC Department of Education is complicit in trying to bust the union at the expense of the students’ safety and civil rights. She told PIST, “We have been asking the DOE for months, why is the safety of our children up for bidding? We want EPP!”

At a June 12 Bronx PIST meeting, parents and ATU activists exchanged strategies for turning this situation around by organizing — in the courts, on the internet and in the streets.

Besides informing the press and all relevant government agencies of their concerns, Cancel said, “PIST members will be out all summer recruiting others to join the fight for better busing. We will protest at the bid conference on July 29 and demand: Safety for children; justice for workers!”

Correction: The first version of this report incorrectly identified “Allied” (Allied Transit, Inc.) as one of the bus companies that terminated drivers.