July 8 — This Workers World Commentary was first written July 5, before the failed attempt to make Mohammed ElBaradei the prime minister and before the fighting to restore Mohammed Morsi as president broke out. What appears below includes slight additions but is essentially the same. 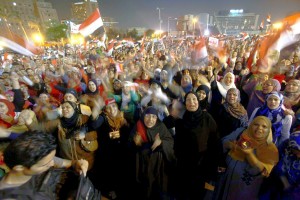 An unprecedented outpouring of millions of Egyptians from all across the country has shown that the Egyptian revolution is not only alive but is on the rise. Having accomplished the overthrow of dictator Hosni Mubarak by protracted mobilization, enormous heroism and great sacrifice, the masses have once again come into the streets to demand the fulfillment of the revolution that they fought for in 2011.

But while the revolution shows its numerical power, there is confusion about the role of the military — which threatens to derail the revolution.

Alongside the mass mobilization, a brazen military coup d’état has taken place in Egypt. 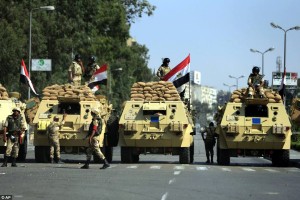 The Morsi government had earned popular anger by bringing its own brand of social and political reaction. Meanwhile, it did nothing to counter the growing economic hardship of the Egyptian masses.

Whatever the grievances against the Morsi regime, however — and there are many — even worse for the Egyptian people would be the reemergence of the reactionary, repressive, corrupt military machine and security forces created and funded by the Pentagon.

The brutal military regime has sent tanks and troops to overthrow the Morsi government by force, arresting hundreds of leaders of his political party, the Freedom and Justice Party, and of the Muslim Brotherhood. This has liquidated any semblance of even a minimal expression of the bourgeois democracy represented by Morsi’s election. The generals propose to restore it once they have rearranged things more to their liking.

The role in the coup of U.S. imperialism, the real dominant force in Egypt, is unclear. Sections of the U.S. ruling class were clearly worried about the coup’s consequences. Others were cautiously in favor of it. The New York Times opposed the coup, while the Washington Post, which is usually more hawkish than the Times, went so far as to demand a cutoff of U.S. military aid to Cairo. They fear future uprisings. The Wall Street Journal, however, favored the coup.

It is a certainty that this coup did not take Washington by surprise. The Pentagon generals had to have been fully informed and probably consulted on the “new path” that the military was going to lay out. They will undoubtedly try to influence the outcome. Defense Minister Abdel Fattah Al Sisi, who announced the coup and charted the “road map,” was educated at the U.S. Army War College in Carlisle, Pa.

Whatever the case may be, the Egyptian military regime had been a client of U.S. imperialism for decades before the coup, and will continue to be a client after the coup. And whether Washington approved this coup or not, U.S. imperialism will fully support whatever Egyptian regime emerges and continue to ply it with arms because of Egypt’s strategic importance to U.S. domination over the Middle East and its oil.

The Egyptian generals have their own urgent interests in carrying out the coup. The corrupt and decadent military high command is more than just the state. They are an important part of the Egyptian capitalist ruling class. They own enormous properties in industry and commerce. The officer corps have their own hospitals, schools and clubs and are a privileged elite that has looted the economy at will and wants to maintain this position.

The military has moved preemptively in an attempt to dissipate the growing tidal wave of mass protests that showed no confidence in the Morsi government and demanded early presidential elections. This has enabled the generals to get temporary credit with the masses and strike a blow at their historical adversaries, the Muslim Brotherhood.

This political opening was created by an unprincipled and opportunistic alliance between, on the one hand, misleaders of the secular movement, sections of the youth movement, and Islamic forces in rivalry with the Brotherhood and, on the other hand, the military regime. The military’s so-called “road map” to democracy was worked out in advance with Mohamed ElBaradei, the former director general of the U.N.’s International Atomic Energy Agency — a person thoroughly within the ranks of world imperialism’s high-level servants.

The Morsi regime had honored the Egyptian peace treaty with Israel that left the Palestinians oppressed. It even flooded the tunnels between Egypt and Gaza in an attempt to destroy a vital economic connection circumventing the Israeli blockade. It did not prosecute those from the Hosni Mubarak regime who murdered the youth during the 2011 revolution. It looked the other way when there were assaults on women.

The Morsi regime went along with International Monetary Fund demands to cut subsidies for food and electricity. It came out for the overthrow of the Syrian government and never showed even the slightest degree of independence from imperialism. The regime disregarded secular objections to the emphasis on Islamic law, and it never really reached out to the youth.

The Morsi regime betrayed the democratic revolution that the masses had heroically fought for in Tahrir Square and throughout Egypt in 2011. In a popular petition, “Tamarrud” (rebellion), which was signed by more than 15 million people, the originators denounced neglect of the poor, subservience to the U.S. and lack of justice for the martyrs of 2011.

These grievances are entirely justified. But the reactionary forces partial to the old regime embraced the petition campaign and swelled the numbers of protesters, knowing full well that once Morsi was ousted and the military was back in the saddle, none of the progressive demands would ever be satisfied. It was crude political cynicism and a completely underhanded maneuver.

Although the generals are already moving forces from the Mubarak era into positions of power in the new state apparatus, this whole precarious structure may fall apart quickly. Popular support for the military rulers cannot last, as another betrayal of the revolutionary masses is on the agenda.

The army enjoyed much prestige in Egyptian society after Col. Gamal Abdel Nasser and the Association of Free Officers threw out the British feudal puppet King Farouk in 1952 and politically liberated the country from colonial domination. It gained even more prestige with its wars against Israel. But after Nasser, Anwar Sadat in 1979 signed a peace treaty with Israel that had been negotiated at Camp David, Md., and the Egyptian army became a pawn of the Pentagon.

Illusions about the military were prevalent in the 2011 phase of the revolution, when the slogan was raised that “the army and the people are one.” These illusions have now resurfaced, and the generals have stoked them in every way.

The people who wanted justice, national liberation, economic security and political liberty in 2011, and who are now praising the coup, will have to go into the streets again to reclaim the revolution by independent mass struggle. The lesson of this coup may be that in order to obtain any genuine bourgeois democracy, the “deep state” — the military, the security forces, the police — must be destroyed. So long as they are in place, they will do all in their power, openly or behind the scenes, to prevent any true mass democracy or significant improvement in the life of the people.

To get democracy, it will be necessary to destroy the Egyptian state and break its connections to U.S. imperialism and the Pentagon. That will lay the basis for sweeping away Egyptian capitalism, which is really the only road to liberation.