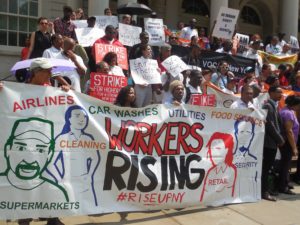 On the steps of New York’s City Hall on June 27, fast-food workers denounced the low wages, lack of benefits, and long hours that they face on the job. These mostly African-American and Latino/a workers told of their terrible working conditions as they toil for racist bosses while their voices are ignored.

They then took their demand that city and state politicians work hard to raise the hourly minimum wage, to $15 from $7.25, into a New York City Council committee hearing. They documented the difficulties of providing for a family on only $11,000 — a full-time fast food worker’s yearly pay. With 50,000 workers in this city, fast-food companies are making billions in profits.

Guatemalan car washers and Dominicans who aid the disabled at city airports also spoke. One Delta worker reported his hourly salary is still $8.00, the same as his starting wage three years ago, and that the airlines don’t provide sick time or insurance. “It’s a race to the bottom destroying individuals and communities.  Nobody listens to us.  It doesn’t have to be this way.”

Participants came from the Restaurant Opportunities Center, Make the Road, Living Wage, NYC; NY Communities for Change, UNITE HERE, RWDSU, and the May 1 Coalition for Worker and Immigrant Rights.