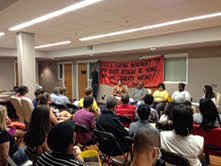 The Durham, N.C., branch of Workers World Party held a forum on June 26 called “Battleground NC: The Fight for People’s Power.” More than 50 people attended the forum, which discussed how to continue to deepen the growing fightback against the state’s right-wing legislature and build the growing “Moral Monday” resistance. These weekly protests have continued to grow as thousands mobilize at the legislature; more than 600 people have been arrested. Speakers at the forum included Saladin Muhammed, of the Southern Workers Assembly; Qasima Wideman, of North Carolina HEAT; Zaina Alsous, of Workers World Party and the North Carolina Student Power Union; and the Rev. C. D. Witherspoon, president of the Baltimore chapter of the Southern Christian Leadership Council, who traveled to the forum to share the experiences of building the Baltimore People’s Power Assembly.