By Imani Henry and Scott Williams

Tallahassee, Fla., July 28 — In response to the freeing of George Zimmerman, the killer of 17-year-old Trayvon Martin, who was stalked and shot to death simply because he was young, Black and male, the students of color group — the Dream Defenders — have been sitting in and sleeping over in the Florida Statehouse here since July 16. 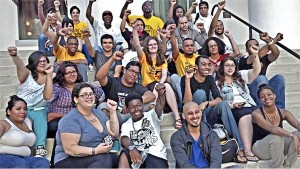 Initially calling this action, #takeovertuesdays, the Dream Defenders seized the outer office of Florida Gov. Rick Scott’s 12 days ago. They are calling on Scott to convene a special session of the Florida Legislature, “to repeal the state Stand Your Ground law, ban racial profiling and end the school-to-prison pipeline.” (dreamdefenders.org) 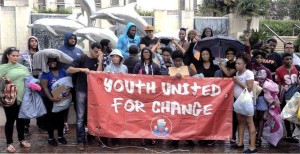 Despite an attempt by the state police to starve out the protesters by preventing donated food from reaching them, the struggle continues. The campaign has been renamed #takeoverFL; the Dream Defenders remain defiant that they will not leave the Capitol building until their main demands are met.

Dream Defenders’ Executive Director Philip Agnew told Workers World, “The most important thing that people should know is we are not leaving here. This is not a temporary thing. The governor and the Legislature need to know that this is for the future so no one has to do this again. This is not just about the verdict. This is just the latest in a series of injustices against young people.”

Agnew said the organization has eight chapters in Florida; they are student organizations directed by Black and Brown youth. “We put out a call for people to join us within the Alliance for Education Justice to join us on the weekend of July 26-30.”

In response to that call, buses came from Boston, New York, Philadelphia, Baltimore, Washington, D.C. and other cities on the East Coast.  Supporters also came from New Orleans, La., from all over Florida, and from as far as California.

Lead organizer Mustafa Sullivan told the bus riders that, “We are freedom riding for Trayvon, Ramarley [Graham], all the young people who are stopped and frisked or killed by the New York Police Department.”

As many as 159 people were sleeping over, singing, playing games, and holding strong political discussions. A Defenders’ parents came from Indiana for the weekend to sit-in with and support their son.  A youth organizer from Philly brought his mother. A pastor from Florida waited outside the Capitol all night to join the Dream Defenders in the morning.

On July 26, some 300 people took part in a militant and exciting rally that echoed throughout the Capitol building. A highlight of the day was a visit by activist and performer Harry Belafonte who came to show solidarity.

On Saturday evening, July 27, the Tallahassee Capitol Police began denying the protesters access to food donations, even though an 8-year-old child was with them inside the Statehouse.

On July 28, most of the activists who came from around the country had boarded their buses to return to their home bases. But it doesn’t mean that their part in the struggle in Tallahassee is over.

The Dream Defenders are continuing their sit-in at the Capitol. For updates, see dreamdefenders.org

Imani Henry rode the NYC bus, Scott Williams the Philadelphia bus. They will report on interviews with sit-in participants in future articles.