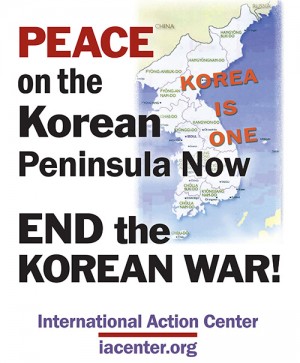 Pyongyang, Democratic People’s Republic of Korea — Even on normal days, this magnificent city proudly wears its history on its sleeve. There are monuments and buildings everywhere dedicated to the almost unimaginable sacrifices the Korean people have made to safeguard their independence from would-be conquerors.

But these are not normal days. This is the 60th anniversary of the armistice agreement, signed on July 27, 1953, that ended the three-year bloody conflict called the Korean War in the West and the Fatherland Liberation War here.

To mark the occasion here in the north of the divided Korean peninsula, thousands of foreigners and many governments have been invited to share in festivities organized by the Workers’ Party of Korea. Flags with the party’s symbol — a hammer, a sickle and a brush, to symbolize the workers, peasants and intellectuals whose revolution transformed the north — fly from buildings and lampposts alongside the national flag of the DPRK.

Most honored in the many activities occurring around this city and the country are veterans of the war. Their light-brown uniforms, many bespangled with medals, are seen everywhere, and younger people show them special reverence as they pass on the street.

Their lined faces and lean, hard bodies bespeak their age and the hardships they endured fighting for their country and their future.

People in the United States seldom hear anything about that war anymore. When the corporate media talk about “North Korea” — they rarely mention its real name — it is almost always to attack the leadership and the measures they have taken to strengthen the country’s defenses.

But here in the DPRK, everyone knows about the war and their support for the government’s “army first” policy is resounding.

The centerpiece of the July 27 commemoration was a military parade through Kim Il Sung Square, named for the legendary revolutionary leader and military tactician whose guerrilla army liberated the north from Japanese colonial rule in 1945. Kim became the first president of the DPRK in 1948 and led the young country’s resistance to U.S. imperialist aggression from 1950 to 1953.

Hundreds of thousands of Koreans participated in the parade, including units of the military, militia members and civilians. Their body language and chanting of slogans showed extraordinary determination. Despite standing hours in a very hot sun in full dress uniforms, the ranks of women and men maintained perfect formation, then marched with a high-stepping, almost bouncing gait that exuded coordinated energy.

Then came a massive display of weapons, ranging from multiple-rocket launchers to long-range artillery mounted on trucks and tanks. Nuclear-capable missiles rolled by as MiG jets and helicopters zoomed overhead. The civilians then got their chance to march and chant, which they did with great passion as they passed the reviewing stand.

The DPRK’s new young leader, Kim Jong Un, was joined there by high dignitaries, including Vice President Li Yuanchao of the People’s Republic of China. Special homage was paid to the million Chinese volunteers who had joined forces with the Koreans during the war to push back the U.S. invaders. A large delegation of Chinese veterans of the war attended the ceremonies.

The DPRK’s military forces are purely defensive. Unlike the imperialist United States, it has no troops on foreign soil, no nuclear subs prowling the oceans, no battleships threatening to invade the Middle East or Africa or Latin America. But it has in recent years developed a nuclear deterrent, having both warheads and the long-range missiles capable of delivering them. However, it has pledged never to use them in a first strike.

The U.S. government refuses to make such a commitment and threatens the whole world with the Pentagon’s stated policy of not ruling out a “preemptive” nuclear attack.

Early this year, the U.S. carried out large-scale military exercises right off the borders of the DPRK that for the first time included Japanese forces. This set off alarm bells in both Korea and China, which suffered horribly from Japanese colonial aggression before and during World War II.

Kim Il Sung and other leaders of the Korean Revolution had gained their early military experience in the 1930s fighting alongside Chinese Communists and patriots against the Japanese annexation of Manchuria, the Chinese province adjoining northern Korea.

With the defeat of Imperial Japan in World War II, anti-colonial revolutions spread throughout Asia, most led by Communists. But only five years later, the U.S. launched the war in Korea in an attempt to establish its hegemony over the entire peninsula.

It failed. Despite having inflicted millions of deaths on the Korean people and leveling structures in the north with carpet bombing and napalm, the Truman administration had to sign an armistice agreement with the DPRK.

Koreans today are celebrating this first defeat for the supposedly invincible U.S. imperialism while emphasizing their “army first” policy as the best insurance against such a war ever happening again.

This celebratory mood was given exuberant cultural expression on the evening of July 26 in a performance of “Arirang.” This multifaceted drama employed song, dance, fireworks, acrobatics, high-wire aerialists and even preschoolers coordinating intricate jump-rope routines while thousands of students seated in the bleachers illustrated the story with rapid flip-card scene changes. Some 200,000 people participated in or watched the production.

More than anything, these mass events showed the energy, unity and determination of the people of the DPRK to defend the hard-won gains of their anti-colonial socialist revolution and support their leaders’ defiance of all imperialist threats.

A solidarity delegation from Workers World Party attended the celebrations in Pyongyang at the invitation of the Workers’ Party of Korea. Larry Holmes, first secretary of WWP’s National Committee, headed the delegation and was accompanied by the author of this article as well as by Elena Gilbert, an organizer in the South.