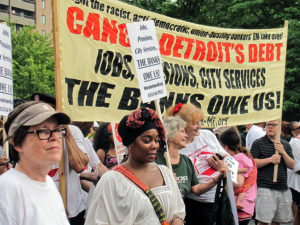 June 22 represented a highpoint in Detroit when tens of thousands of people gathered on Woodward Avenue in midtown and marched downtown to Hart Plaza. The demonstration marked the 50th anniversary of the “Great Walk to Freedom” on June 23, 1963, when hundreds of thousands made a profound statement supporting the passage of a federal civil rights bill and the end to discrimination in employment and housing in the city.

The 1963 march was led by the Rev. Dr. Martin Luther King Jr., president of the Southern Christian Leadership Conference; Rev. C. L. Franklin, leader of the Detroit Council for Human Rights; Benjamin McFall, businessman and official at New Bethel Baptist Church where Franklin was pastor; Rev. Albert Cleage, pastor of Central Congregational Church; Walter ­Reuther, United Auto Workers president; and James Del Rio, educator and politician, among others. The march was the largest demonstration for civil rights in U.S. history until Aug. 28, 1963, when the March on Washington attracted 250,000 people.

At the conclusion of the Detroit march, during a rally at Cobo Hall, Dr. King delivered an earlier version of his “I Have a Dream” speech. King had developed the speech since at least 1962, but the address delivered in Washington has become the most widely known.

Motown Records released King’s speech in Detroit later that year. Nonetheless, over the last 50 years, many people have not known that the Detroit speech, given two months before the March on Washington address, echoed similar themes.

Some organizers and family members of those involved in Detroit’s “Great Walk to Freedom” have claimed that it was far larger than police estimates of 125,000. Del Rio, who was a key organizer of the march and was in a photograph showing him in leadership, said that 400,000 to 500,000 people participated.

Aretha Franklin, the “Queen of Soul” and Rev. Franklin’s daughter, said in a Detroit Free Press interview on June 21, “You couldn’t tell me there were not a million, million and a half people on Woodward that day. I’m accustomed to appraising numbers of people simply because of my concerts. I’m looking at the miles it covered. You had people everywhere in every corner and on every side and that went on for a very, very long way down Woodward. That was a lot more than 100,000 people.”

Coalition members distributed 5,000 leaflets to the marchers, calling for cancellation of the bank debt supposedly owed by the people of Detroit. They also handed out signs reading, “Cancel the Debt!” “Stop Debt-Service Payments to the Banks!” and “No Emergency Manager, Make the Banks Pay!”

The Coalition has called demonstrations against Emergency Manager Kevyn Orr at several public venues. On June 29 at 1:00 p.m., the organization is convening a strategy meeting with numerous organizations committed to the struggle to overturn emergency management and to preserve pensions, healthcare benefits, jobs and city assets.

When Orr called a meeting with labor unions on June 20 at City Hall, the Coleman A. Young Municipal Center, he didn’t show up. His representatives presented an ultimatum to the unions that would force a cut in pensions and eliminate healthcare benefits for retirees, who would be forced into Medicare and Obamacare.

Orr also announced an investigation into the two pension funds — one for general employees and the other for the police and fire departments. The corporate media have run stories alleging bad investments and reckless spending on “perks” made by pension funds’ trustees.

Bloomberg Municipal Market wrote on June 21, “Detroit workers not already vested in a city pension would be excluded and many retirees would be moved to federal health care programs under cost cuts the emergency manager outlined for union leaders. For those covered by a plan, benefits would be frozen and some would be switched to 401(k)-like defined-contribution savings accounts, under Orr’s proposal.”

The same article noted that Orr had not “determined how much to take from future or current retirees, pending an actuarial analysis. Automatic cost-of-living raises would be eliminated, and worker contributions into the system would rise.”

The municipal pension systems have set aside $5 million to fight Orr’s proposed changes. Orr has threatened to take the city of Detroit into bankruptcy if the labor unions don’t grant concessions. If that happens, the court could liquidate pensions, health care benefits, city assets and services. Moratorium NOW! Coalition activists have followed similar developments in Stockton and San Bernardino, Calif., where bankruptcy proceedings are pitting civil servants, pensioners and elected officials against the banks, bondholders and their insurers.

Coalition organizers are demanding that city workers’ pensions and health care benefits remain untouched throughout the restructuring process. Orr and his corporate and financial institution backers have labeled the city’s pension obligations “unsecured.”

Orr declared a “moratorium” on $2.5 billion in debt, which would theoretically encompass both debt-service and principal payments. The corporate media have reported that Orr is telling creditors that they may be forced to accept “pennies on the dollar” for their claims against the city.

Even Bloomberg reported, “The proposal, laid out at two sessions led by Orr’s advisers on municipal restructuring, provoked angry responses from some union leaders who said Orr was dictating unpalatable benefit cuts for workers to help erase deficits and avoid bankruptcy.”

It will take a mass struggle led by workers and pensioners to reverse Orr’s plans for massive benefit cuts to guarantee payments of fraudulent debts to the bankers and capitalist bondholders. The Moratorium NOW! Coalition has obtained more than 3,000 pages of documents concerning loans and bond issues for Detroit dating back nearly a decade. These documents indicate the disadvantageous situation the majority African – American municipality has been placed in due to job loss, predatory lending and the avaricious role of the banks.

The Moratorium NOW! Coalition is calling for an investigation of the banks and other financial institutions’ roles in the city’s economic ruin. A purported probe ordered by Orr is only designed to provide a rationale for a bank-led seizure of the more than $5 billion pension system. For more information, see moratorium-mi.org and detroitdebtmoratorium.org.