The gendarmes and police attacked with force and brutality. They used gas, rubber bullets and burning chemicals sprayed from water cannon. They clubbed and stomped injured people lying on the ground. Doctors trying to help the wounded were beaten and shot point-blank with tear gas canisters.

A pregnant  woman lost her child. A 14-year-old, shot in the head with a tear gas canister, is in critical condition.

After occupying the square, cops and gendarmes rampaged through the streets clubbing anyone they saw. They attacked hotels where people took refuge and flooded apartment buildings with gas. Plainclothes cops wielding sticks with nails joined in the attacks.

In Ankara, the capital, cops attacked a funeral procession for 26-year-old Ethem Sarisuluk, shot to death by police on June 1. Dilan Dursun, a woman student, was hit in the head and is in a coma. All public gatherings in the city were illegally declared “illegal.” 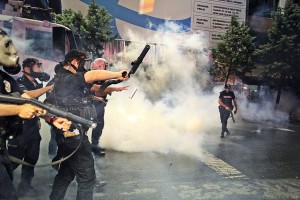 The Erdogan regime unleashed the new wave of violence the day after Deputy Prime Minister Besir Atalay met with U.S. intelligence officials in Washington. He said they discussed “fighting terrorism” and that the White House “understood” the situation in Turkey. (worldbulletin.net, June 14) On June 16, Turkish Minister for European Union Affairs Egemen Bagis announced that any  civilians entering Taksim Square would be considered “terrorists.” (boingboing.net, June 16)

The giant protest movement sweeping Turkey began as a response to police brutality. Erdogan and his allies thought more brutality would end it. They were wrong.

The massive use of force has succeeded so far in denying the people of Istanbul the right to enter their city’s most historic square. But in every other street and neighborhood of that ancient metropolis, in every other city and town in the country, resistance continues.

On the night of June 15, as people across Istanbul heard of the attack on Taksim, they poured into the streets, sometimes building barricades. Thousands from Istanbul’s Asian side stormed a bridge across the Bosphorus strait that divides Asia from Europe, trying to reach Taksim on the European side.

The next day, people were in the streets in cities, towns and villages across Turkey, chanting “No surrender” and “Taksim is everywhere, everywhere is resistance.”

And on June 17, hundreds of thousands of workers, members of the Confederation of Public Workers (KESK) and the Confederation of Revolutionary Trade Unions (DISK) went on strike against police terror. They were joined by unions of doctors, dentists and engineers. Banks were closed and buses didn’t run.

As of this writing, thousands of union workers and supporters, led by miners, have marched to the police lines surrounding Taksim. Deputy Prime Minister Bulent Arinc threatened to call out the army if protests continue.

Erdogan and his Justice and Development Party (AKP) also mobilized their supporters. Hundreds of thousands were brought in from around the country to the Istanbul waterfront to hear the prime minister speak on June 16.

At the pro-AKP rally, Erdogan tried to portray his regime as defending Turkey against “foreign interference.” But even as the protests raged, the AKP government passed a law opening Turkey’s energy sector wide to outside investors. The AKP government has also defied popular opinion by making NATO Turkey a forward base for the the Pentagon-CIA covert war against Syria.

The Pentagon and CIA are working toward a wider sectarian war in the region. The people’s uprising in Turkey is a setback to those plans.

The Turkish Communist Party (TKP) in a June 17 statement described “the fundamental achievement” of the resistance: “The people have risen up in Turkey. The brutality of police might have an impact on the pace and form of the resistance. But it is just that. No power can push our people back to indifference and apathy or force them to bow down. The previous widespread belief that ‘we will not achieve anything’ has been buried into past. The price that we paid was not paid of no avail. This achievement is our country’s today and future. Our people deserve to imagine the future. Our people have to look at the future. The precondition to win the future is obvious: To get organized!”