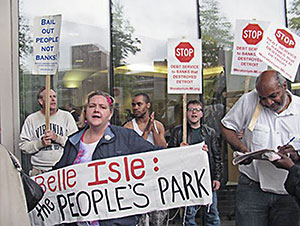 Detroit — A new restructuring plan has been issued for Detroit with no real input by the people of the city. Kevyn Orr, the state-appointed emergency manager, held a closed meeting on June 14 with creditors and some labor leaders at the Westin Hotel in the main terminal at Wayne County’s Detroit Metropolitan Airport.

Orr’s meeting was met with a demonstration organized by the Moratorium NOW! Coalition to Stop Foreclosures, Evictions & Utility Shutoffs. The coalition brought a group of workers, retirees, community activists and youth to the airport to denounce the emergency manager system for its total disregard of the democratic will of the people of Detroit and Michigan. The protest also exposed the preferences given by the EM to the bankers and bondholders who are largely responsible for the destruction of the city’s infrastructure and the impoverishment of its people.

The demonstration, which received national press coverage, was the culmination of a series of activities over the previous six weeks which attempted to mobilize people in the city to challenge the role of the banks in the proposed restructuring of Detroit. Detroiters have consistently opposed the EM appointment through mass demonstrations, rallies, civil disobedience, lawsuits, petition drives and a statewide ballot referendum.

On June 10, Orr held a “public meeting” at Wayne State University Law School where he presented a dire review of the city’s finances. Despite Orr’s cancelling two meetings the previous week, hundreds showed up to hear what the emergency manager had to say. Orr was required by the EM law to hold a public forum within 30 days of his initial report, which was issued May 12. Moratorium NOW! had called for demonstrations at both of Orr’s cancelled appearances.

Most people at the gathering were opposed to the appointment of Orr. Many sought entry into the meeting, but more than 200 people were declined admission due to limited space. As people lined up outside the Law School after finding out they would not be allowed in, many broke out chanting, “Let us in! Let us in!”

Other groups joined Moratorium NOW! both inside and outside the Law School, holding signs and chanting slogans about making the banks pay for the crisis and denouncing the theft of the right to vote for officials who have some semblance of political authority. Emergency management has been implemented in many cities across Michigan, most of which have majority African-American populations.

Signs calling for a moratorium on the payment of debt service to the banks and the preservation of municipal employees’ pensions were photographed by local and national press. The demonstration lasted for more than two hours while the meeting took place inside.

Moratorium NOW! organizer Jerry Goldberg, who attended the meeting, was able to get the microphone and asked Orr why he was not going after the banks which have “stolen billions from the people of Detroit.”

Orr said he did not want to look back on who was responsible for the crisis. However, as Goldberg pointed out, under the Emergency Manager Act, Orr is mandated to conduct an investigation of “criminal conduct” that contributed to the financial emergency.

The Moratorium Now! Coalition has consistently noted that it was the criminal fraud perpetrated by the banks — which placed 70 percent of Detroiters in racist, subprime, predatory mortgage loans — that resulted in more than 100,000 home foreclosures from 2005 to 2010, with the resulting massive decline in the city’s population and financial base.

As Goldberg stated, it is outrageous that these same banks now claim first lien on the city’s tax dollars. Orr publicly acknowledged that wrongdoing by banks is the basis for canceling the debt, as demonstrated recently in Jefferson County, Ala. There, JP Morgan Chase was forced to repudiate 70 percent of the debt owed to it by the county because of the bank’s criminal activity there.

The coalition’s positions were met with attacks by the conservative daily Detroit News in two columns which attempted to claim that the banks were not responsible for the destruction of the city.

What Orr advanced in his June 14 report, “City of Detroit: Proposal for Creditors,” was essentially a doomsday scenario for the city and its people. The municipality is facing approximately $18 billion in long-term debt and the population is still declining, with fewer than 700,000 residents.

What jumped out immediately from the report was the claim that “The City will not make the scheduled $39.7 million payment due on its pension-related Certificates of Participation on June 14.” COPs are financial instruments that derive revenue from lease transactions that are considered unsecured. Under interest rate swaps associated with COPs, Detroit is paying banks like UBS and Bank of America more than 6 percent interest on bonds whose actual interest rate is 0.57 percent.

This $39.7 million due June 14 is the first substantial default on payments to creditors since a similar event in Cleveland in 1978. Orr also reported that $2.5 billion in other unsecured debts, those not based on revenue-generating assets, will not be paid in the short term.

The financial community has expressed concern over calls for a moratorium on both debt service and principal payments to banks and bondholders. Moody’s, in a press release in May, objected to these proposals being floated now by Orr and his advisers as a short-term necessity to maintain the city’s operations.

During the week of June 10, Detroit was hit by what Standard & Poor’s described as a “super-downgrade” on the value of its bonds. Later Moody’s also issued a downgrade. These rating declines will compound the city’s financial crisis by further destabilizing its so-called “creditworthiness.”

What is glaringly absent from Orr’s report is the need for hundreds of thousands of jobs for people who live in the city in order to create an economic recovery. Massive joblessness in the city was acknowledged in the report, but no concrete plan for the creation of jobs was advanced.

The problems associated with public lighting outages across the city were also cited, but no program for repairing the city-owned equipment was addressed.

There is much in Orr’s report about a rise in crime in the city, but no recognition of the role the financial institutions played and continue to play in this situation, when they targeted the city’s population for racist, predatory lending in both housing and municipal finance.

Another closed-door meeting is scheduled with city labor unions on June 20. Union leaders who were present at the June 14 meeting expressed opposition to the proposed cuts in health care and pension benefits.

Although specific details have not yet been released, proposals were announced that would cut pension allotments and cancel health care benefits for retirees, forcing them into the Affordable Healthcare Program or Medicare. The Department of Water and Sewage, the Department of Public Works, Belle Isle Park and other public assets are being strongly considered initially for privatization of operations and possible sell-off down the line.

What is needed to turn things around

The labor unions, municipal retirees, community organizations, youth and students, and workers in general must be organized to fight these proposed austerity measures. Orr, a bankruptcy attorney by profession, is positioning the state to enact even deeper cuts that will negatively impact workers and residents of Detroit. He cannot be relied upon to challenge the banks. In fact, under the Emergency Manager Act, Orr is mandated to guarantee payment of the banks’ debt service at the expense of city jobs, services and pensions.

Over the last five years, workers have already experienced massive pay cuts, furlough days, hikes in benefit co-pays, layoffs and privatization of services that have destroyed jobs. More than 2,700 city positions have been eliminated since 2010, and job conditions for remaining workers have worsened considerably.

Orr has threatened to take the city into bankruptcy if there is any push-back from workers, pension boards, retirees and other community organizations. This bankruptcy would be the largest in U.S. history involving a major municipality. Federal bankruptcy law would enter unchartered territory, which could lead to court-imposed cuts in pensions, which are guaranteed by state law, but which may be subjected to drastic changes through the bankruptcy procedure.

Other municipalities facing similar problems, Stockton and San Bernardino, Calif., have been subjected to efforts by the banks and bond insurers to force the cities to pay their financial creditors as opposed to making pensions and health care a priority for workers and retirees.

Moratorium NOW! Coalition and other mass organizations are committed to working with the labor unions and retirees to fight the imposition of Orr’s bank-engineered austerity program on the city of Detroit. The coalition is demanding that Detroit’s debt to the banks be canceled; that city workers’ wages and pensions and city services be retained and expanded; that the banks be forced to pay billions to the city as restitution for the destruction they have caused; and that these funds be utilized for a massive jobs program to put Detroit’s unemployed residents to work rebuilding this city into the working-class mecca it once was.

Mass and direct action will be the determining factor in this struggle as it emerges in the period to come.