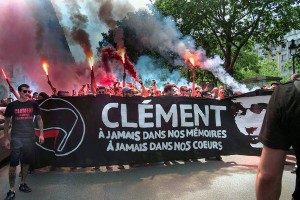 Clément Méric, an 18-year-old student at an elite university in Paris and a militant in the Antifascist Action collective (AAPB), was killed June 5 by a blow from brass knuckles wielded by members of a far-right group.

The Facebook page of the AAPB says that Méric was the “victim of violence by the far right that has developed in the past few months.” One of his fellow students, using the name Camille, told Le Monde, “He was attacked because he was a militant anti-fascist.” (June 7) Another student told l’Humanité, “He was always handing out leaflets supporting the rights of foreigners, for the equality of men and women.” (June 7)

YouTube videos show him marching in the front of the AAPB contingent during a major protest in support of changes to French law to allow gay marriage and gay adoption.

Earlier, in high school, he was a militant in the student union, leading opposition to “reforms” that the right-wing government of Nicolas Sarkozy was trying to impose.

The day after Méric’s murder, most of the major cities in France had protests — some like Paris and Lille in the thousands, some like Brest, Méric’s hometown, in the hundreds. Pictures from protests by anti-fascist groups in Germany and Spain on June 7 and June 8 were also posted to the photo website Flickr.

In Paris, the protests started at 5 p.m. at the place where Méric was killed. The crowd chanted “No pasaran” and the chant from the Spanish Civil war against fascism, “Fascism is a gangrene, eliminate it or bury it.” After a minute of silence, a banner with the slogan “Clément, 05/06/2013, forever one of ours” was unfurled. (“05/06/2013” is the French style of abbreviation for June 5, 2013.)

An hour later, at Place St. Michel, all the left-wing parties gathered to pay homage to Méric. The site is a traditional gathering spot for students in Paris. Various members of the crowd — fellow students, anti-fascist militants, leaders of various left-wing parties — all made the point that Méric didn’t die in a student brawl; his killing was a political assassination.

All these protests put major pressure on the French government to disband the violent and fascist group to which Méric’s killers belonged. As of June 10, the government has taken the first steps in this process.