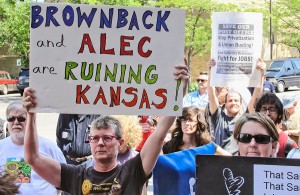 Poor and working people from throughout northeastern Kansas and beyond marched and rallied in Lawrence on June 8 to protest a racist austerity budget passed by the right-wing Legislature and likely to be signed into law soon by Gov. Sam Brownback.

At a rally at the Plymouth Congregational Church, progressive, faith-based, labor and community leaders denounced the austerity budget. This was followed by a mass march down Massachusetts Avenue, the central street in this city that has a history of anti-slavery and abolitionist struggle, along with the spirit of John Brown.

The new budget contains hundreds of millions of dollars in tax breaks to the rich, while it fleeces the working class with hikes in numerous official taxes and other forms of austerity, such as massive cuts to higher education.

Many bills hostile to labor and community interests have been signed by Brownback in this legislative session. This is on top of the elimination of certain business taxes, passed in 2012 and implemented in 2013, which have caused enormous shortfalls in the state budget.

These laws are being passed at the behest of Wall Street and in particular the banks, which are demanding their “debt service.” Wall Street’s political servants in the State House are assisted by capitalist individuals and organizations such as the Koch brothers, Americans For Prosperity and the American Legislative Exchange Council.

Those rallying June 8 made it clear the class struggle is alive in Kansas. Chanting “Brownback’s gotta go!” and “Stand up! Fight back!” and hoisting placards such as “People’s budget — not banker’s budget” and “Money for public education,” the protesters vowed that the people’s struggle will continue.