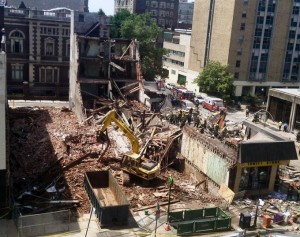 Philadelphia — Six people are dead and 14 injured after a building undergoing demolition fell onto a Salvation Army thrift store at 22nd and Market streets here on June 5. A 30-foot-high wall of heavy bricks fell through the busy main street storefront’s roof, subsequently causing the floor, the store’s contents, customers and staff to collapse into the basement.

Calling it “an accident” would be unfair to the deceased. Kimberly Finnegan, Borbor Davis, Juanita Harmin, Mary Simpson, Anne Bryan and Roseline Conteh are casualties of the profits-at-any-cost mentality of STB Investments Corps. The properties being demolished next to the crushed building were owned by STB, whose officers are Richard Basciano, Scott Wexler, Frank Cresci Jr. and Anthony Trumbetta, based in New York City at 300 W. 43rd St.

Basciano signed a $10,000 contract with nonunion Griffin Campbell Construction to raze the buildings, at a shockingly small fraction of the $150,000 normally paid for a project of this size.

“This is the most egregious construction accident I think I’ve ever been involved in. … Given (Campbell’s) checkered past, and what appears to be a total lack of experience and know-how, we believe that was a grossly negligent selection,” said Robert Mongeluzzi, the attorney for Nadine White, who was buried in the building’s rubble but survived. Mongeluzzi charged the demolition contractor with violating several federal safety regulations. He also said Basciano should have picked a more qualified and competent contractor to do the work. (Associated Press, June 6)

The U.S. Occupational Safety and Health Administration said it received a complaint May 15 that workers at the site were at risk of falling. OSHA regulates the demolition industry and enforces standards meant to ensure worker safety.

Regulations forbid any wall section exceeding one story from standing alone without bracing, unless the wall was designed that way. Witnesses said they saw a 30-foot section of unbraced wall before the collapse.

A video of the demolition taken a few days earlier showed bricks raining down on the sidewalk as a worker used a backhoe and claw to remove a second-story front wall. No barriers were visible that would prevent pedestrians from using the sidewalk or the staircase leading up from an underground subway trolley — clear violations of OSHA regulations that require a safety zone surrounding a demolition site.

A complaint to Philadelphia License and Inspections on May 6 reported that workers were not wearing hardhats or other safety equipment. (NBC 10, June 7)

Robert Brehm, a Drexel University construction engineer, said he would have evacuated the Salvation Army structure “not because I expected the wall to fall on the one-story, but it is a predictable outcome. Sometimes it doesn’t fall the way you want it to fall.” Michael R. Taylor, executive director of the National Demolition Association, said, “Why wouldn’t you tell the Salvation Army guys to close their thrift store until the adjoining building was down?” (AP, June 6)

The Salvation Army had previously contacted lawyers for STB Investments Corp. about safety concerns. They replied with assurances that “they would be taking proper precautions,” said Maj. Robert W. Dixon, director of operations of The Salvation Army of Greater Philadelphia. (NPR, June 8)

Instead of arresting Richard Basciano and the other owners for “involuntary manslaughter, risking a catastrophe and reckless endangerment,” the worker who operated the equipment is being charged with these crimes. Two days after the collapse, Deputy Mayor Everett Gillison announced six charges would be filed against the crane operator. The racist media has been quick to point out that the African-American operator, Sean Benschop, is a former prisoner who was supposedly “high on marijuana.”

Mainstream reports have also centered on exposing the alleged past criminal record of the small business owner, Griffin Campbell, who is also African American.

An expert at several trials involving building collapses, Florida-based contractor Stephen Estrin, said using a claw creates vibrations in the walls of the building being demolished. “This is an inner-city demolition of a masonry building, which would normally be done manually because of the inherent risk — predictable, if certain things are not done very slowly and very carefully — of a collapse,” Estrin said. (Philadelphia Tribune, June 6)

Benschop was just following orders as a worker. Campbell was clearly unqualified to do this type of demolition.

Government officials reluctant to regulate business and enforce safety standards must be considered as a contributing factor.

Just last year, two Philadelphia firefighters died and three others were injured after a wall collapsed in a building that had been cited repeatedly for safety violations. The building’s owner had failed to pay $60,000 in taxes and another $12,000 in water fees. Philadelphia officials on numerous occasions complained to York Street Property Development LP of Brooklyn, N.Y., that the warehouse presented a danger, given its deteriorated condition. But they never took the steps to remedy the situation.

The primacy of capitalist private property concerns over worker and community safety rights kept city officials from demolishing the dangerous property and preventing the eventual fatalities.

But the real culprits in the June 5 collapse are the owners of the structures at 2134—2138 Market St. They are the ones who made the decision to hire the cheapest, nonunion and unqualified demolition contractor. Profit, not safety, was their primary concern.

Little attention, however, is being focused on the wealthy property owners ultimately responsible.

The surrounding area was once made up of small businesses and inexpensive apartments. Over the last decade, new construction and refurbished buildings have created a shift to a neighborhood of high-priced apartments and condos.

The cost to live in the 42-story Murano condos at 2100 Market St., just across the street from the catastrophe, ranges from $399,900 to $2,175,000. The 178-unit high-rise is advertised as “an amenity-rich building with a 24-hour concierge, 60′ indoor heated lap pool, fitness center, sun terrace, community room and so much more. A storage locker and an assigned parking space is included in an attached covered parking garage.” (thecondoshops.com)

The three buildings being razed had a total current market value of $3,259,900. STB paid just $385,894 for the property in 1994. Developing the properties held a promise for much higher profits.

STB’s haste to take part in the gold rush of gentrification led to the building collapse, fatalities and injuries on June 5.

Two and a half million people, the majority of them people of color and from the working class, languish in U.S. prisons. They are victims of a legal system skewed against poor and working people.

The wealthy are not treated the same. STB officers, if they are even charged with any crimes, can afford the best attorneys and face court officials predisposed to rule in their favor due to class allegiances.

Until capitalism itself collapses under the hammer of people’s righteous anger, the lives of workers and the oppressed will always be valued as less precious.