Excerpted from a talk at Workers World Party forum in New York City. 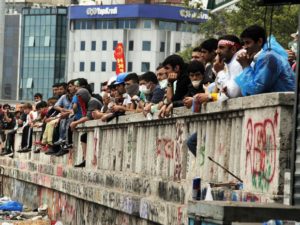 Demonstrators wait at the entrance of Taksim Gezi park on June 12.

June 10 — Once again a social explosion is rocking a large country in the so-called Middle East.

The spontaneous uprising of the people of Turkey against their country’s U.S.-backed neoliberal regime has taken imperialism by surprise. It is disrupting the Pentagon’s covert war against Syria, in which Turkey is a forward base for NATO. It jeopardizes ExxonMobil’s plans to build an oil pipeline from Iraqi Kurdistan to the Mediterranean through Turkey and Turkish-Israeli plans to jointly exploit natural gas off the coast of occupied Palestine.

The U.S. State Department urged Ankara to make minor concessions to cool the situation. But the regime of Tayyip Erdogan seems little inclined to do so. And Turkey’s people are not backing down despite unbridled police terror.

On May 31, a small group of environmentalists sat down in Gezi Park in Istanbul’s historic Taksim Square to protest the state’s plans to cut down 606 sycamore trees to build a shopping mall. The police attacked them, but got a response they didn’t bargain for. As news of the brutality spread, people poured into the streets. Protests spread through the huge, ancient metropolis and soon to towns, cities and even villages throughout the country.

For 10 days now, hundreds of thousands of ordinary people have held the streets against a brutal state apparatus. They have built barricades and fought cops armed with clubs, tear gas, water cannons, plastic bullets and sometimes real ones. Offices of the governing Justice and Development Party (AKP) have been attacked around the country. In Istanbul protesters used an excavator to try to pull down Prime Minister Erdogan’s office.

The cops have killed at least three protesters and injured thousands. People have been charged with “sedition” for things they wrote on Twitter. But on June 9, more than 1 million defiant people flooded into Taksim Square.

Social composition of the protests

Much like Occupy Wall Street, the first demonstrators were students, unemployed college graduates and young professionals. The protest soon spread, both to organized labor and to the urban poor and rural migrants who had been AKP’s electoral base. The 240,000-member public workers union KESK and the Revolutionary Confederation of Trade Unions (DISK) held a two-day general strike to protest police repression. A peaceful union rally in Ankara was attacked by the police with trucks and water cannons.

Now on the barricades can be seen women and men of all ages, football supporters in team jerseys and older women in headscarves. Some of the fiercest demonstrations have been in southeast Turkey, where many Arab people live. In Adana and Antakya, protesters attacked offices of the CIA-backed Free Syrian Army.

Kurdish people have joined the protests under their own banners. On June 7, Abdullah Ocalan, the imprisoned leader of the outlawed Kurdistan Workers Party (PKK), declared support for the protests and warned against the danger of a military coup: “No one should let himself be used by nationalist, pro-coup circles. The democrat, revolutionary, patriot and progressive circles should not let this movement slide under their surveillance.” (Kurdistan Tribune, June 8)

Demonstrators stress unity among Muslim groupings, Sunnis and Alevis, and Christians and among Turks, Kurds and Arabs. This is in contrast to the sectarianism promoted by the regime, which, in the spirit of the Free Syrian Army it supports, named a bridge for 16th-century Sultan Yavuz Selim, who massacred Alevi Muslims. Of Turkey’s 76 million people, 25 percent are Alevi, about 20 percent are Kurdish.

Western media reports focus on social issues like the AKP’s instituting religious classes in public schools and restricting the sale of alcohol. But popular outrage is fueled by a decade of neoliberal attacks on the public sector — including cutbacks, privatization and union busting — as well as high unemployment and a growing wealth gap despite Turkey’s recent economic boom. The upsurge also follows mass protests against Turkey’s role in the Pentagon-CIA-NATO covert war on Syria.

The new Turkish state built a strong public sector but was ruled by the capitalist class. Fearing the workers and oppressed, it brutally oppressed the Kurdish people, denying them the right to speak their own language, denying their very existence. It outlawed the Communist Party and killed its leaders.

After World War II and during the Cold War, Turkey joined NATO and sent troops to fight for the U.S. in Korea. The U.S. Sixth Fleet was based at Izmir, and the U.S. Air Force used its base at Incirlik for spy flights over the USSR. Turkey was the only Muslim country to have open military, economic and diplomatic ties to apartheid Israel.

Turkey was governed by a succession of secular nationalist parties, some social democratic, some right-wing. But real power was held by the NATO-aligned military, which seized control directly in 1960, 1970 and 1980. In the 1970s state-backed death squads murdered hundreds of leftists and labor activists.

A 1980 military junta banned unions and political parties and jailed 500,000 people, hundreds of whom died in prison. When the Kurdish people began an armed struggle for freedom in 1984, the state responded with a campaign of terror and massacres, killing ten of thousands.

An Islamic revival in the 1980s and 1990s led to the rise of the Virtue party, which was banned in 2001 because it did not adhere to the secularist constitution. The right-wing, pro-business wing of that party formed the AKP, which rode to office in 2002 on a wave of popular resentment against the military’s power. The new government amended the constitution to strengthen civilian authority. It purged many high-ranking officers and opened peace negotiations with the PKK.

But its economic program is vicious neoliberalism. Under the veneer of Islamic values, it enforced IMF demands for privatization and cutbacks more effectively than the military did under martial law. An economic boom followed, based largely on high oil prices in neighboring countries and speculative “hot money.” Unemployment and poverty rates remain high.

The mass demonstrations in Turkey are a spontaneous explosion involving many forces. The largest organized group is the social-democratic Republican Peoples Party, which takes its name from the party of Kemal Ataturk. It opposes the war on Syria but is chauvinist on the Kurdish question.

Also on the front lines of the struggle, left forces, such as the Communist Party of Turkey, are trying to unite the movement around concrete democratic demands.