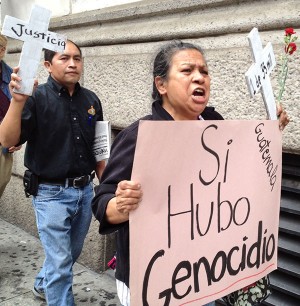 On May 20, the Guatemalan Constitutional Court annulled the conviction of Guatemalan dictator, Gen. Efraín Ríos Montt.

Just ten days before, Ríos Montt had been found guilty for acts of genocide and crimes against humanity in Guatemala that amounted to some of the worst atrocities ever in Latin American history. His conviction had been the very first time that a head of state had been held accountable for atrocities in a national tribunal. His conviction included his being sentenced to 80 years in prison.

But the international relief that came from a long-awaited justice-serving verdict was short lived when the decision was annulled. The annulment threw the fight for justice into complete turmoil as it also declared that everything that had transpired in the trial after April 19 was invalidated.

In the early 1980s, Ríos Montt, with the full complicity of the U.S. government, implemented one of the bloodiest and most ruthless counterinsurgency campaigns in Latin American history. The conflict lasted for over 35 years and by its the end over 200,000 Guatemalans had been brutally killed. Ríos Montt was personally responsible from 1981-83 for the deaths of 1,700 Mayan Ixil people, a massacre which included the killing of children and the raping of women.

The goal was to annihilate the resistance of the Guatemalan people, a fightback which included an armed insurgency.

Upon word of the annulment, Guatemalans took to the streets in outrage to protest with the rallying cry, “¡Sí, hubo genocidio!” (Yes, there was genocide!). The U.S. State Department issued a warning alerting all U.S. citizens to avoid a demonstration in front of the U.S. Embassy the very day the case was annulled.

Protesters in Guatemala and elsewhere vowed to continue the struggle against this racist travesty of justice. Ríos Montt may be free to walk the streets today, but sooner or later the people of Guatemala, especially the Indigenous people, will triumph.