New York — Doing justice to the life of an outstanding figure in the arduous struggle to liberate humanity from capitalist wage slavery is a daunting task. Yet that’s what a gathering of Vince Copeland’s comrades in Workers World Party set out to do on June 7, the 20th anniversary of his death.

At a memorial tribute here, they described with clarity and great affection how Copeland, a Marxist thinker and workers’ leader, fought the bosses for more than five decades, as both a militant steelworker and a brilliant writer, Marxist historian and orator.

Copeland made his mark on the labor and communist movements during a period largely defined by political reaction.

Born in 1915, he grew up during the Great Depression and knew what it meant to live in flophouses while dining on coffee and donuts. After a short stint in the Army, which during the 1930s was the one place a young person could be assured of “three hots and a cot,” he gravitated to the stage. Even in those hard times, he was successful in getting acting roles alongside such luminaries as Katharine Cornell, Lillian Gish, Ethel Waters and Jose Ferrer.

From his ideas into practice

But Copeland couldn’t ignore what was happening in the real world. More and more, he chafed at the prospect of building a career for himself while the lives of millions were ruined by the breakdown of the capitalist system.

The capitalist struggle for markets had already broken out into war in Europe when Copeland decided to chuck the theater and get a job in heavy industry in his hometown, Buffalo, N.Y., in order to use his talents in the class struggle. 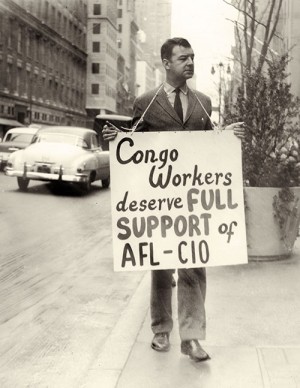 He had found his life partner, Libby Ross, who shared his political enthusiasms and hated what capitalism was doing to the world. With her two small children, they settled into a life of fighting for workers’ rights and building the nucleus of a revolutionary socialist political organization.

In 1950, Copeland was fired from Bethlehem Steel, a casualty of the extreme red-baiting of the McCarthy period. As the Buffalo News pointed out in his obituary in 1993, he had led many wildcat strikes particularly directed at the racist seniority system then existing in the plant. The years of work spent by Black workers in hot and dangerous jobs in the blast furnaces and coke ovens weren’t counted when jobs opened up in other departments, leading to de facto segregation in the plant.

Copeland had succeeded in building a caucus of both Black and white workers to fight this great injustice. He had also been editor of the union newspaper and head picket captain during several intense strikes. When he was fired, in a great show of the unity he had fought for, all 16,000 workers in Bethlehem downed their tools and walked out.

Most of the speakers at the memorial tribute had known Copeland only later, after he had helped found Workers World Party in 1959 with Sam Marcy, Dorothy Ballan, Ross and a core of their fellow worker-revolutionaries.

The party’s birth coincided with the success of the Cuban Revolution, which gave a great boost to leftists everywhere, especially as it moved from implementing agrarian reform to expropriating the capitalist class and beginning to construct socialism.

While being inspired by Cuba, the group that founded WWP was very aware of the damage that decades of imperialist pressures and the Cold War had done in other countries where capitalism had been overturned.

Copeland wrote an important document analyzing the counterrevolution that threatened to take over Hungary in 1956, which prompted the Soviet Union to send troops there. While much of the left called it a “revolution,” ­Copeland proved very concretely that the leadership was in the hands of extremely reactionary forces, bolstered by both the Catholic Church and the imperialists, who would have turned the country back to capitalism.

Events in Hungary foreshadowed the process that eventually led to the surrender of Eastern Europe by Soviet Premier Mikhail Gorbachev and the dissolution of the USSR itself, which is now so clearly seen as a monumental disaster for workers around the world.

With the formation of Workers World Party, Copeland became editor of the newspaper you are reading. It took uncompromising positions on all the major ­issues of the day, emphasizing the right of the oppressed to armed self-defense — as in the case of Rob Williams as well as the Black Panthers.

It was one of the very first to recognize the significance of the U.S. war against Vietnam, soon expanded to Laos and Cambodia. WW encouraged resistance to the war and covered acts of bravery by youth, anti-war GIs and of course the Vietnamese themselves.

Copeland himself was a leader of one of New York’s largest anti-war events, when 100,000 people marched down Fifth Avenue in 1966. One of the speakers at this year’s tribute recalled that, as the representative of a group in the coalition, Copeland was at the head of the march when a right-winger dashed out in front with a giant U.S. flag and a sign attacking the Vietnamese. While others looked away, Copeland tackled the guy and brought him down.

It was a great day when, on May Day 1975, Workers World was finally able to run the banner front-page headline: “Vietnam belongs to the workers!”

In this period, Copeland began writing a number of books in which he applied his understanding of Marxism and Leninism to an analysis of U.S. history.

In “Southern Populism and Black Labor,” he examined the Populist movement’s failure to overcome racism and build unity between poor whites and the oppressed Black nation.

In “A Voice from Harper’s Ferry,” he resurrected a manuscript by Osborne Anderson, the only Black survivor of John Brown’s 1859 raid on that pro-slavery outpost, which prefigured the Civil War. Besides Copeland’s own introduction, “The Unfinished Revolution,” the book also contains commentaries by WW Managing Editor Monica Moorehead and political prisoner Mumia Abu-Jamal.

Copeland also wrote two books about how the expansionist urge of U.S. monopoly capitalism drove it into the imperialist era: “The Built-in U.S. War Drive” and “Expanding Empire.” These books deal with not only the economics behind war but also the complex political relationships that allow the warmakers to prevail in a capitalist democracy.

Near the end of his life, Copeland wrote a series of articles on U.S. presidential elections in which his wit and encyclopedic knowledge of the subject make for fascinating reading. Marxism is anything but dull, and Copeland shows it in “Market Elections,” which chronicles the devious and cynical ways in which the rulers have maintained their control over the political process while struggling among themselves over the spoils.

Most often mentioned during the recent tribute to him was a pamphlet Copeland wrote about the steel plant called “Blast Furnace Brothers.” It brings alive the great potential that exists in the working class to come together and struggle for better conditions — while showing that for this to happen, a relentless struggle must take place against all the backwardness and prejudices instilled by this system. And, like his other works, it is an easy read, full of humor and nitty-gritty examples, despite the gravity of the subject.

Most of these books can be read or purchased online. A project is underway to digitize many of them for reading as ebooks. Check them out at the workers.org site, under Books, or on Amazon.com.

This brief review of the memorial tribute covers only a portion of Copeland’s life. Even during the period when he was doing a lot of writing, he was constantly out in the streets fighting for the workers and oppressed. He lived near Jersey City, N.J., with its concentration of many oppressed nationalities, and was an indispensable asset to community leaders battling to keep their hospitals and schools from the budget-cutters’ axe.

Another of Copeland’s books was “Lenin: Thinker and Fighter.” That was also the essence of Vince Copeland, said more than one speaker. Afterward, many of the younger people in the audience who had not known him indicated they had come to the right place.

Some of Copeland’s books online: