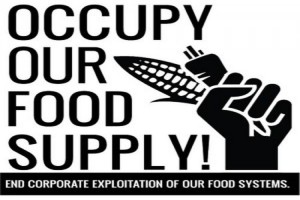 An estimated 2 million people around the world demonstrated on May 25 in opposition to giant conglomerate Monsanto’s production of genetically modified organisms and their introduction into the global food chain. Monsanto, the developer of “Roundup” and other toxic chemicals, has expanded its hold on the agricultural industry to include ownership of seeds, endangering the livelihood of millions of farmers and the health of all consumers.

There was broad and diverse participation from youth, families with children, seniors, farmers, scientists, Occupy activists, socialists and environmentalists who marched and rallied in some 400 cities worldwide.

In Atlanta, 700 people, many wearing red, gathered in Piedmont Park, adjacent to the city’s annual jazz festival, which attracts thousands of music lovers. Many of the festival attendees gave support to the protest and its demand for everyone’s right to healthy food.

The Atlanta-based Food Supply Rescue Coalition has been engaged in educational and protest activities for the past year, calling for GMO labeling as an immediate step in the struggle to defeat corporate control over food.