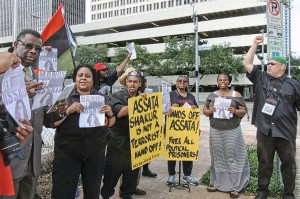 Militant supporters of former political prisoner Assata Shakur, who was liberated from a U.S. federal prison and has lived in Cuba since 1984, gathered at Houston’s federal building on May 14 to let the U.S. government know that the reprehensible $2 million bounty put on this revolutionary sister is a travesty.

The protest was organized by Sister Krystal Muhammad, a leader of the New Black Panther Party in Houston, and drew activists from the National Black United Front, Workers World Party, Harris County Green Party, Occupy Houston Movement, Afrikans United For Sanity Now and the Nation of Islam. Speakers called for the release of ALL political prisoners, from Sundiata Acoli to Mumia Abu-Jamal, Leonard Peltier and the Cuban Five.