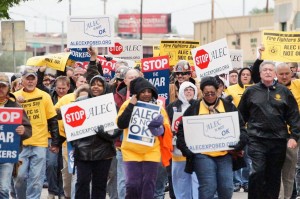 Two of the greatest enemies of working people were confronted in Kansas and Oklahoma over the past two weeks.

On May 2, hundreds of poor and working people came out to protest the American Legislative Exchange Council’s national conference in Oklahoma City. ALEC is a right-wing organization that writes boilerplate racist, anti-worker, anti-community legislation that is being rammed through legislatures and signed into law throughout the country. Sponsored by the Oklahoma State AFL-CIO, labor-community participants at the May 2 protest came from Texas, Kansas and other states.

On May 11, a broad array of working people protested Paul Ryan at Benedictine College’s 2013 commencement ceremony in Atchison, Kan., chanting “Ryan says cut back! We say fight back!” Many students, parents, nuns, community members and alumni were outraged that Ryan, a principal leader of austerity in the U.S. Congress, was chosen as commencement speaker at this liberal arts college, especially after he just announced his support for massive cuts in Pell Grants and other aspects of education. Retirees and others at the protest, held on the sidewalks of the main entrance to the college, denounced Ryan’s moves to privatize Social Security and to eviscerate Medicare and Medicaid.

As graduates and their loved ones entered the Benedictine’s grounds for the graduation ceremony, they were greeted by protesters offering them congratulations for their academic accomplishments; in turn, many supportive thumbs up and shouts of approval were returned to the protesters.