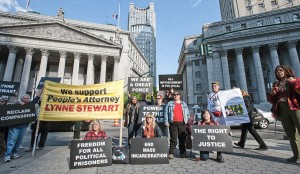 The lifesaving struggle to free Lynne Stewart, “the people’s lawyer,” continues.  Following a full-house rally on May 9 at St. Mark’s Theatre in New York City, a vigil was held in Foley Square on May 15.  The latter activity was held near the Manhattan federal courthouse where, in 2010, Stewart was unjustly convicted and sentenced to 10 years in prison for the “crime” of providing her client, a so-called “terrorist,” with a fearless defense.

The government’s relentless persecution of Stewart places her on the long list of political prisoners in the United States.  Many of them have been in prison for decades and will be incarcerated for the rest of their lives.   Stewart has been victimized and caught up in Washington’s “war on terror.”

At the well-attended and spirited vigil, which demanded Stewart’s release, many activists spoke lovingly of this courageous civil liberties and human rights attorney who has devoted her life to the oppressed, and has been a constant advocate for those who have been deprived of their freedom and rights in this country. Everyone expressed their disdain for a sinister government that would acknowledge yet persecute Stewart for her contributions to humanity and the fight for justice.

Prior to her imprisonment, Stewart’s breast cancer was in remission.  Surgery that had been scheduled then was delayed for 18 months due to her imprisonment.  In January, she discovered that the cancer had returned, having metastasized to several areas of her body. It has now reached stage four.

Given her age and precarious health status, the 10-year sentence imposed by Federal District Judge John Koeltl has become a virtual death sentence.  The treatment has been debilitating, with complications that can be as dangerous as the cancer itself.  To add insult to injury, Stewart is shackled at the wrist and ankle to the hospital bed.

A probation officer was recently dispatched to the residence of Stewart’s son — who is also an attorney — to inspect its suitability for her care.  The home was approved.  An alternate plan is for Stewart to be released to New York’s Memorial Sloan-Kettering Cancer Center.

Bureaucratic stalemates are now holding up the release request, despite thousands of signed petition signatures and local and international statements on Stewart’s behalf.  These include a  declaration from activist Dick Gregory saying that he intends to fast and not eat solid food until Stewart’s release.

At this time, Stewart is waiting for the Federal Bureau of Prison’s director, Charles E. Samuels Jr., to file a motion for compassionate release with Koeltl, the sentencing judge.   Her supporters must keep the pressure on and continue the struggle to demand her release.  She is literally fighting for her life.

In her own words, Stewart says, “Like a tree that grows in Brooklyn, I will not be content until my feet are firmly planted in my Brooklyn home.”   See a recent interview with her conducted by Noelle Hanrahan at lynnestewart.org, where you can get more information and sign the petition calling for Stewart’s release.